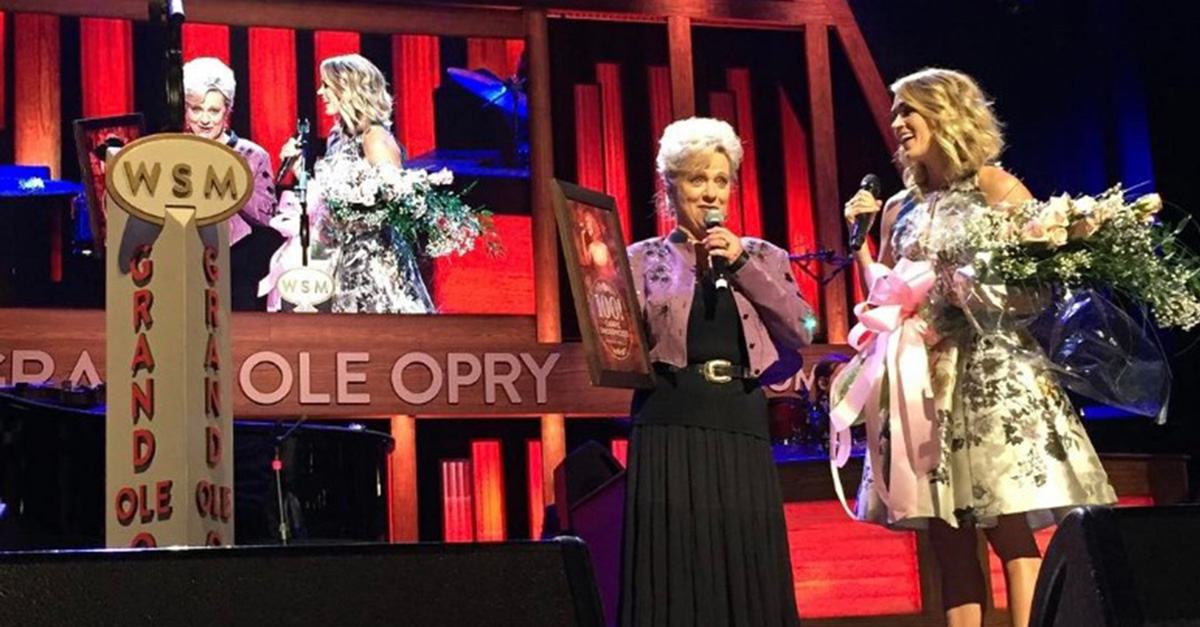 Carrie Underwood performed at the Grand Ole Opry on March 25, as part of one of four sold-out shows. But, unlike other appearances, this one marked her 100th performance on the world famous stage.

To honor the “Church Bells” star, Grand Ole Opry member Connie Smith introduced her to the stage. She also presented Carrie with a commemorative print and a rose bouquet in celebration of her success.

?Opry fans, all of us Opry members, and the entire Opry family are excited when you come home to the Opry stage,? Connie said, while paying tribute to Carrie. ?Even when you?ve been on the road more than 200 days a year, you?ve always come back to the Opry. That tells me you love us, and we love you right back.?

It?s true. No matter how huge of a star Carrie becomes, she continues to show her love for the Opry. In fact, the current ACM Entertainer of the Year nominee recently dedicated her Instagram page to her well-deserved celebration on the hallowed radio program.

After her 100th debut, Carrie posted a photo of the moment when she received the large bouquet of flowers. She also wrote, ?Me and the amazing Connie Smith standing on that sacred circle… @opry?

Carrie also uploaded two backstage photos that showcased a surprise cake that she received, as part of her 100-show milestone.

When you play your 100th show at the @opry you shove your face into some delicious #IveyCake !!! That's just the way it goes! What an amazing night! Thanks to everyone who shared it with me!

In the first post, Carrie pretends to eat a slice of the specially decorated dessert given to her by Nashville?s IveyCake ? a gourmet bakery run by her best friend, Ivey Childers. Carrie captioned, ?When you play your 100th show at the @opry you shove your face into some delicious #IveyCake !!! That’s just the way it goes! What an amazing night! Thanks to everyone who shared it with me!?

A second shot shows the sweet treat in all of its glory! You’ll also notice a bunch of beautiful pink flowers on each side of the cake. Those flowers were a surprise gift given to Carrie by the Opry!

Here's the whole cake and cupcake tower…along with 100 roses for 100 shows! Such a wonderful night! ❤️️❤️️❤️️ @opry @iveycakestore

Carrie captioned, ?Here’s the whole cake and cupcake tower…along with 100 roses for 100 shows! Such a wonderful night! ????????? @opry @iveycakestore?

Carrie made her Opry debut on June 10, 2005, less than two weeks after winning “American Idol.” In 2008, she became an official Opry member. During her 100th performance, she noted how she grew up watching and listening to the show.

?I grew up dreaming of one day performing here and maybe even becoming a member,? said Carrie. ?That dream comes true over and over each time I take the Opry stage. Here?s to the next 100!?