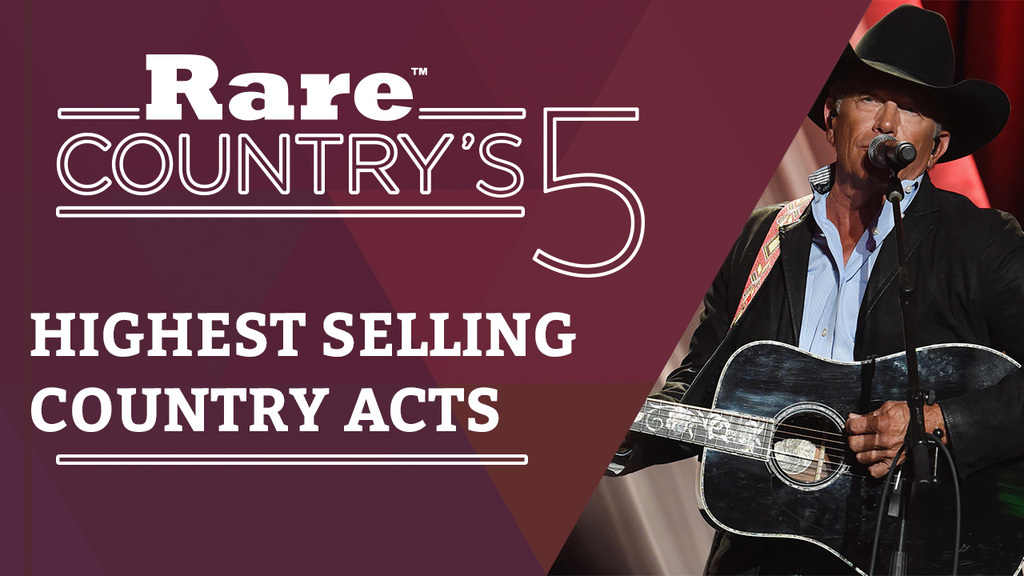 Barbara Mandrell said it best: ?I was country when country wasn?t cool.? The days of country music not being cool are long gone and it shows in album sales for some of the format?s most successful stars. In this week?s Rare Country?s 5, Erin takes a look at some of those high-selling country music superstars and tells us how they earned their status, as well as how successful they actually are. Get ready, though. They aren?t all who you think!

Counting down from No. 5, we find the lone female on our list. Shania Twain dominated country music in her heyday with four studio albums that included such catchy hits pop music fans couldn?t resist either. The beautiful Canadian just announced that she has new music coming, but her previous albums continue to sell well, so this is just icing on the cake.

At No. 4, his name says it all?Cash? Johnny Cash. He may have left us more than 13 years ago, but he remains one of the most relevant and most successful artists in the format. Johnny released his first album 60 years ago and went on to release over 54 more studio albums?that doesn?t include his live projects, gospel or holiday collections, compilations and the work he did with The Highwaymen. Of course, if you asked today?s young country stars, they wouldn?t measure Johnny?s success by the money he made, but by the mark he left on country music?s landscape.

Our No. 3 artist is so incredibly talented, he crossed multiple genres with his wise song choices and oh-so-identifiable voice, but country is where Kenny Rogers planted his feet, and we couldn?t be more thrilled. Of course, Kenny?s song choices are as iconic as his silvery hair and beard, and even his pop music fans can recall every word of ?The Gambler? and at least the chorus of ?Lucille.?

There?s a reason that he?s our No. 2 artist and the king of country music, and while we say it isn?t completely about his record sales, there?s no question that George Strait has sold a truckload of albums. We audibly gasped when Erin told us how many. On top of that, he?s also sold a truckload of concert tickets and holds the record for the largest indoor concert in North America. But this is about records and when you have more than 40 No. 1 singles (“Billboard”), you have to put them somewhere, and they certainly wouldn?t all fit on just one album, right?

RELATED: This hilarious exchange between George Strait and his grandson has us rolling

No. 1 and going strong, Garth Brooks tops our list of country music?s most successful artists. Actually, he?s one of the most successful recording artists, period. Erin can tell you who he inched out and who he?s gaining on, and we can tell you that he continues to sell so well that he has earned seven Diamond certifications, which means seven of his albums have sold at least 10 million copies each. That?s more than any other recording artist, including The Beatles.

That?s it for a glimpse of country music?s highest-selling artists. Be sure to check out Erin?s Rare Country?s 5 video for the specifics on each of these stars, including those big, fat sales numbers. And check back in later this week when we have a re-cap of all the news in and around country music.