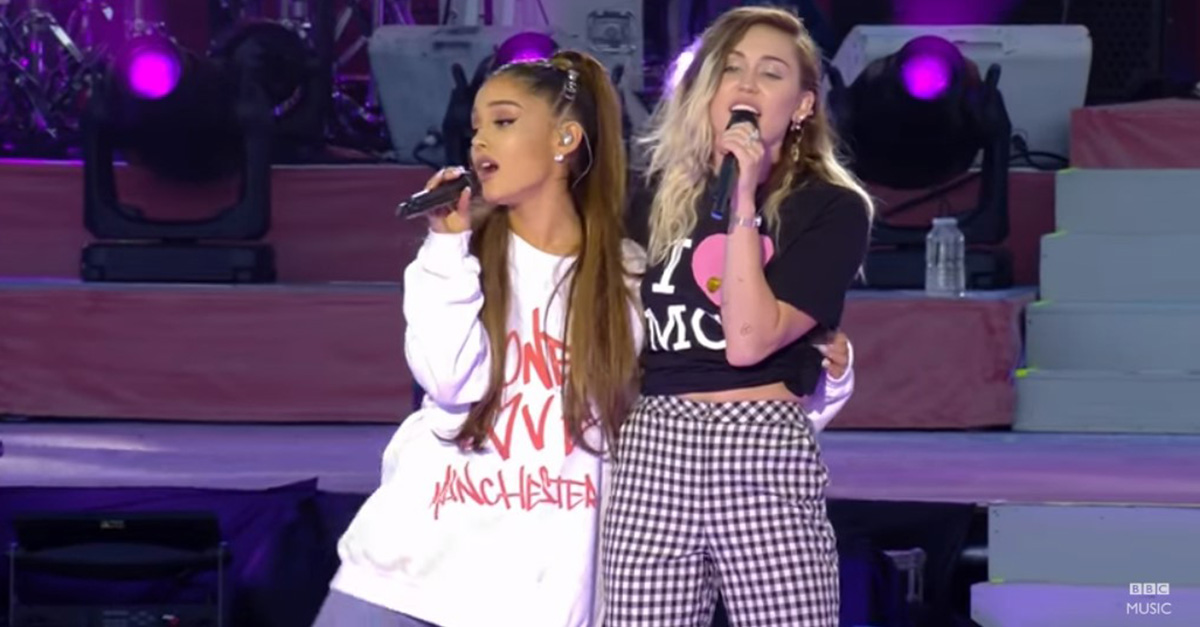 Music filled the air in England on June 4, as many artists showcased their singing talents with pop-star Ariana Grande during an all-star benefit concert dubbed One Love Manchester.

One supporting act in the lineup was none other than Miley Cyrus. She joined Ariana onstage for a beautiful rendition of “Don’t Dream It’s Over” by Crowded House.

RELATED: Miley Cyrus really tapped into her country roots for this daytime performance

Donning “I Love Manchester” shirts, Ariana and Miley sat together on a set of steps. Ariana began the ballad by featuring her lower vocal range on the first verse. Shortly after, the “Malibu” songstress joined in on the chorus. Miley also put her signature rasp to work on the second verse before the crowd of thousands at Manchester’s Old Trafford Cricket Ground sang along with tears in their eyes.

Following their cover, Crowded House band member Neil Finn thanked Miley and Ariana for handpicking the song that he penned. “So good you took our kid for a spin with the good people of @OneLoveManchester @MileyCyrus @ArianaGrande @CrowdedHouseHQ thank you,” he tweeted.

It was obvious that Ariana was emotional during her performance. She had good reason to be, since the entire concert was staged to help the victims and families of a harrowing attack, which took place at her concert less than a month ago. On May 22, the end of Ariana’s Manchester Arena show turned into a scene of chaos when a suicide bombing outside the venue killed 22 people and injured many others.

The One Love Manchester concert not only honored those who were affected by the tragedy, but also raised funds for the families and victims involved.