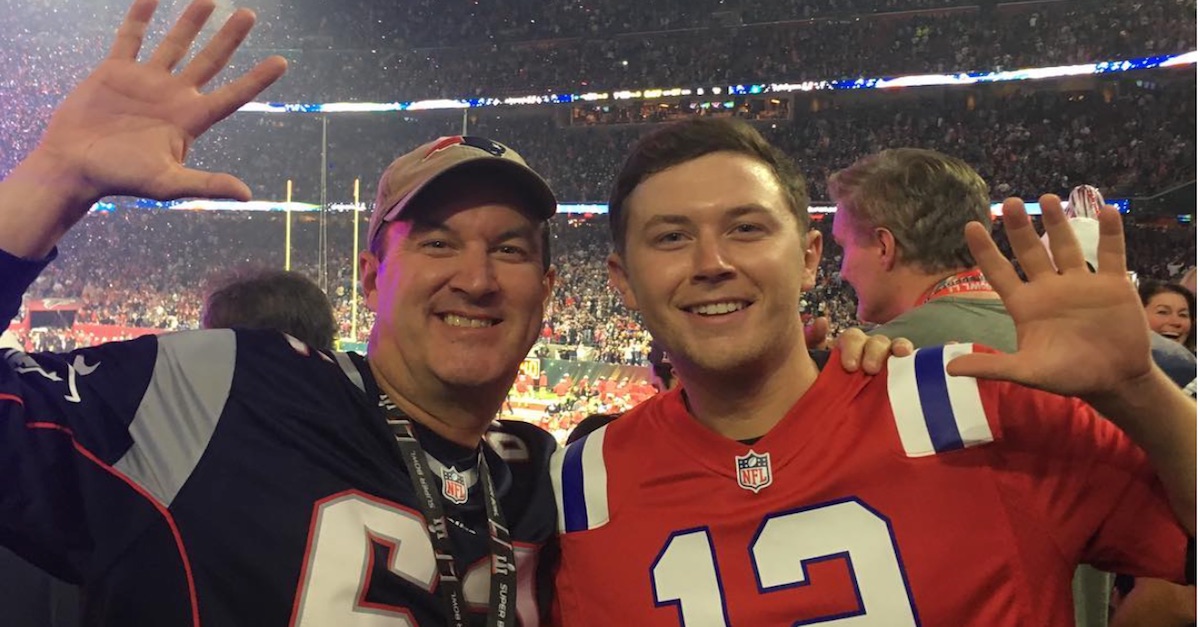 Scotty McCreery got on the phone with Rare Country on the afternoon of Feb. 6 sounding tired, hoarse and ecstatic — and for good reason. The country music star and “American Idol” winner was in Nashville, moving into a new apartment and recovering from a weekend spent alongside his dad in Houston at Super Bowl 51, where he watched his beloved New England Patriots come back from an almost unbelievable deficit to win against the Atlanta Falcons in overtime.

“Everyone kept reminding me to not scream too much since I will be singing at the Randy Travis tribute,” Scotty tells Rare Country, referring to his scheduled performance at “1 Night. 1 Place. 1 Time: A Heroes and Friends Tribute to Randy Travis” on Feb. 8 in Nashville. “I spent the first three quarters depressed,” laughs Scotty, who shared pictures of his fun-filled weekend on his social media channels.

“We were sitting with a bunch of family members of the Patriots players, and everyone was sitting down and sort of upset. And when the score was really bad, I even thought the game was over. But a little part of me believed that if anybody could come back, it would be this team.”

And they sure did.

While Scotty was thrilled to see his beloved Patriots win, he also says he was thrilled to see his buddy Luke Bryan deliver an incredible national anthem. “He killed it,” says Scotty, who was just one of the many country stars in attendance. “It was the strangest thing, because I was there sitting in the stands and my heart started racing when he started singing. I was nervous for him for sure.”

But, perhaps the best part of the night was getting to enjoy it with his dad. “I’ve been so busy here, there and everywhere that I just don’t get to spend as much time with my family as I would like to,” Scotty says. “So being there with my dad… well, it was a night I will never forget.”

FIVE BABY. So glad to see @patriots win #superbowl51 in amazing comeback fashion with @scottymccreery How about next year we do #onemore #happydad #drivefor5iscomplete