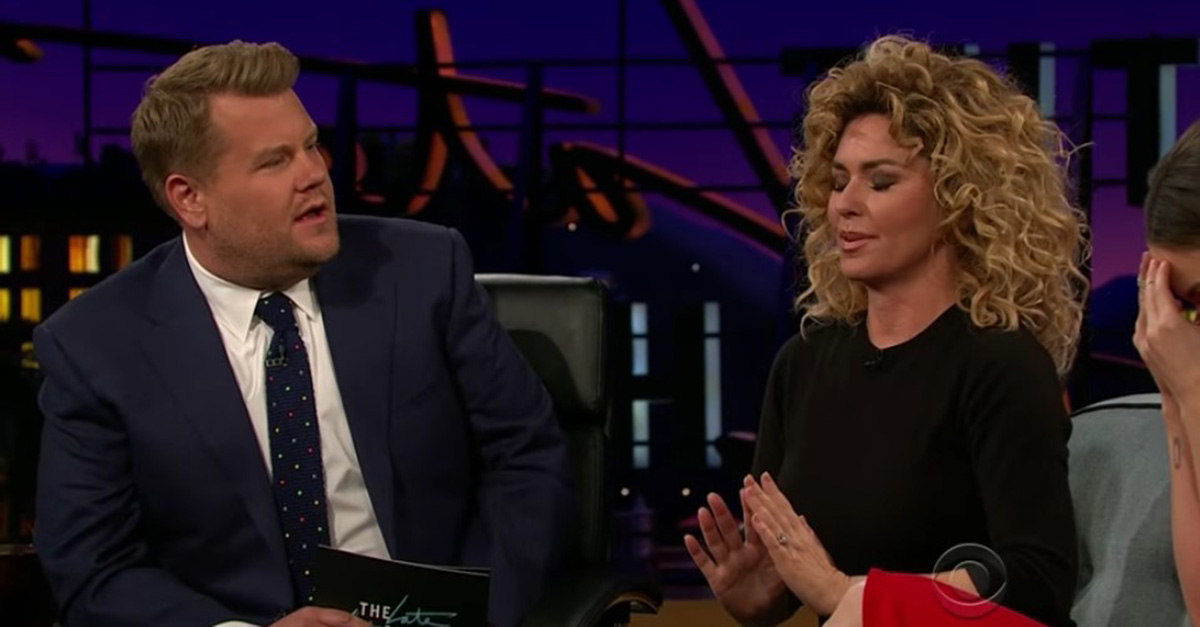 Country music superstar Shania Twain opens up on The Late Late Show with James Corden about a very personal issue. She also talked about it on Live with Kelly and Ryan.

During her appearance, she sat down on a couch with fellow guests, comedian Whitney Cummings and actor Tyrese Gibson, to chat about a number of topics ranging from backyard homes to the popular music festival Coachella.

But, things took a hilarious turn when host James Corden asked Shania if rumors were true that she struggles with stage fright. “Yes, I do. It’s true,” Shania admitted. The question, then, prompted her to share a mortifying childhood story about a time when she experienced stage fright in high school.

“When I was a teenager. I got up in front of my peers, ya know, a bunch of 16-year-old [kids] in front of the school. I was a trumpet player in the band, and this girl says, ‘Would you get up and play us one of your original songs?’ I said, ‘Sure,’” Shania explained. “I literally peed myself. I mean, I was so nervous.”

She also added, “This was not a little pee. This was a puddle. And, when I stood up it just came out. It was terrible. I’ve been fighting it ever since.” Despite Shania’s embarrassment, she says she came up with a clever way to hide the accident from the other students.

“Thankfully, I had a glass of water at my feet and I knocked it over to hide the puddle,” she said with a smile. “On top of that, I was wearing a skirt. So, I totally got away with it. Nobody ever knew that I peed myself.”

How genius is that?

It’s pretty ironic that Shania gets nervous about being in the spotlight considering she is the best-selling female country artist of all time. Not to mention she also previously had a Vegas residency at the Colosseum at Caesars Palace in Las Vegas. But, her fear just makes her that much more real! She also headlined Stagecoach Country Music Festival for the first time ever in Indio, California on Saturday, April 29, 2017. I think she’s got it down now.

Editor’s note: This article was originally published on April 19, 2017.