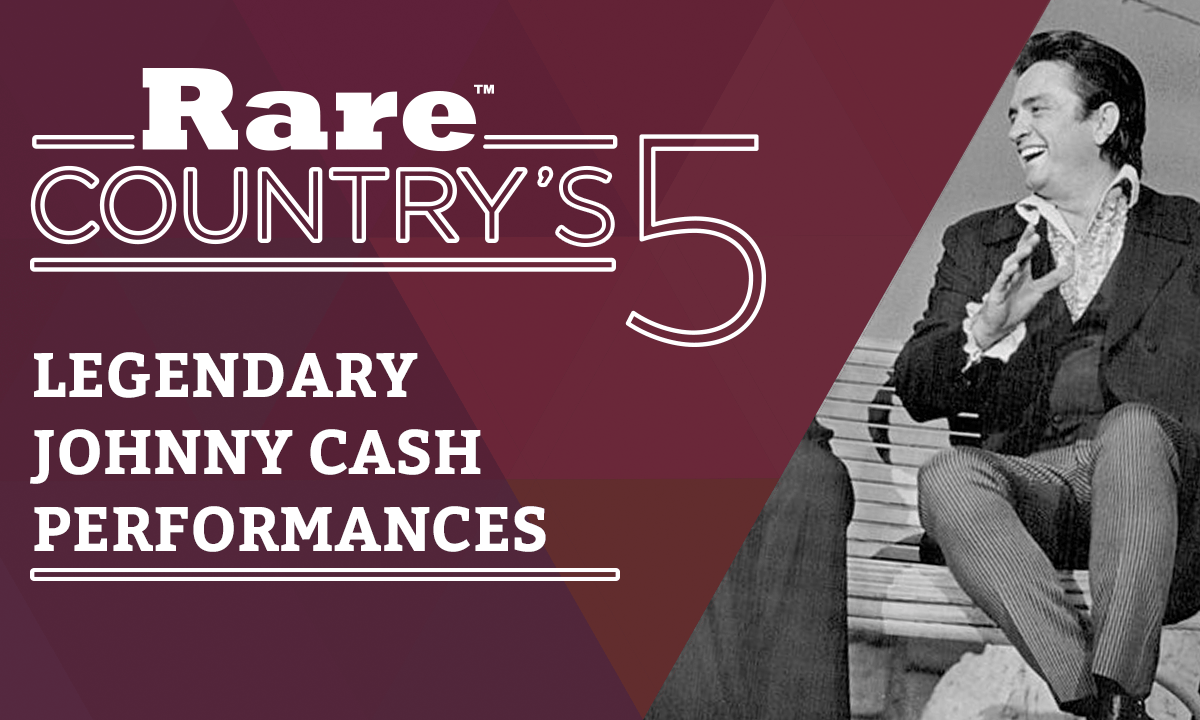 You may not hear his influences in every song on country radio, but you can bet that every country star singing those songs can recall a Johnny Cash moment in their lives. Whether it was one of his hit singles, that iconic ad in “Billboard,” or an outstanding performance, the “Man in Black” had a gigantic influence on generations of singers and songwriters, and not just in country. Rock stars mention him as a favorite, too.

In this week’s Rare Country’s 5, Erin is recalling five of the most memorable solo performances by Johnny, and we’d be surprised if you aren’t familiar with at least one of them.

Starting with No. 5, most country stars anticipate performing at the Grand Ole Opry, not just the first time they play the sacred stage, but every time they play it. It isn’t that Johnny didn’t respect the Opry and all that it stood for, it was his drug addiction that made him act out during his Oct. 5, 1965, performance. Erin has more details in this special edition of Rare Country’s 5.

If Johnny Cash hadn’t been respected for his contribution to the music industry before, he darn sure was when, in 2002, he covered the Nine Inch Nails song “Hurt,” and that’s why it’s our No. 4 performance. Not only was the recording of the song chilling, but the dark, brooding video also suited the angst-filled mood of the tune.

Johnny has a list of classic hits, but one of his biggest, “Ring of Fire,” takes our No. 3 spot Sounding like a mariachi band right out of Mexico, horns give this left-of-center love song, which was written by wife June, a festive feel despite it’s flaming innuendo.

Our No. 2 performance is heartbreaking, yet memorable. He may have been too frail to stand, but in 2003, a few months before his passing, Johnny gave his final performance.  It wasn’t in a vast arena, a dark city theater or even the Grand Ole Opry stage. It was in a small concert venue near Bristol, Virginia that was named for June’s family. Sitting in the center of the stage with son John by his side, the legend sang all of his hits and spoke of his life and his beloved wife who had passed away just a couple of months earlier.

Speaking of legendary, our No. 1 performance is exactly that. Because of his hit song, “Folsom Prison Blues,” it was often assumed that Johnny did time in the California penitentiary, when he actually just went there to perform for the inmates. Now, Johnny did spend a little time in jail and because of that, he may have had a greater connection to the incarcerated, but that’s as much time as Johnny ever did in Folsom State Prison.

Thanks for checking out this special Rare Country 5’s video on the iconic, legendary and beloved Johnny Cash. If you haven’t watched “Walk the Line” yet, starring Joaquin Phoenix and Reese Witherspoon, check it out, too. It’s quite a great biopic of the country singer-songwriter.

Check back in for more fun countdowns and weekly recaps with Erin on Rare Country’s 5.