This country star traded in his hockey stick for a microphone 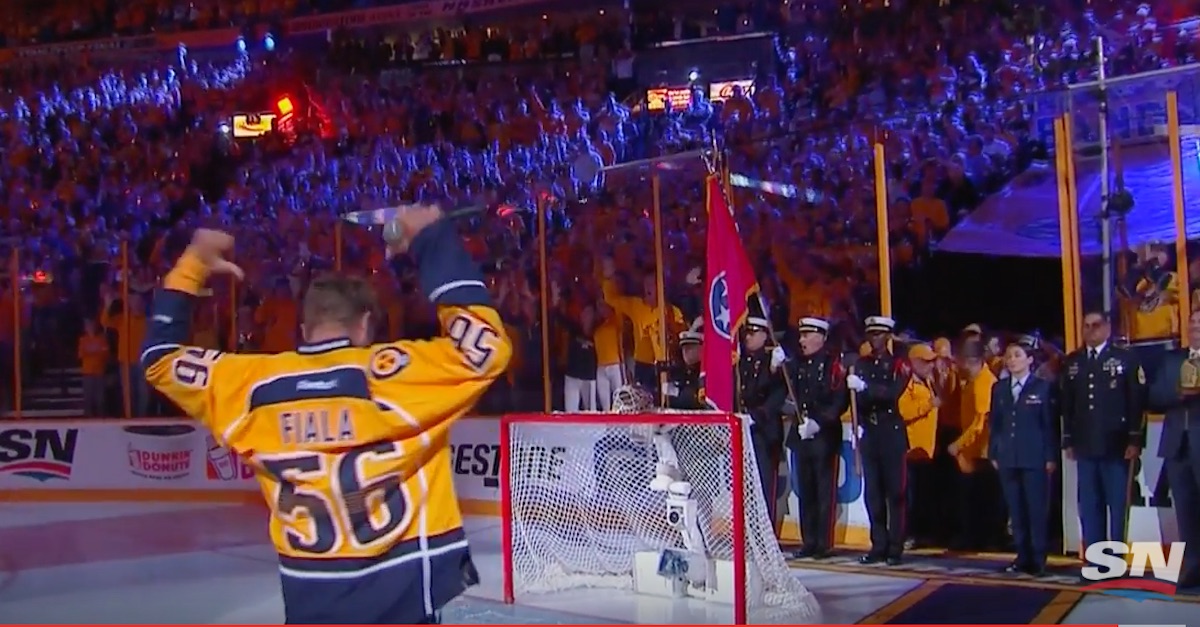 Country stars do all kinds of fun things in their downtime, from hunting and fishing, to horseback riding and surfing, to cooking and painting. Dierks Bentley, for example, likes to spend his downtime on the ice with his hockey team, the Iceholes. But on June 5, he took off his skates and stepped up to the mic to perform the national anthem at Game 4 of the Stanley Cup playoffs.

If he was nervous, it didn?t show, but then again, the ice is familiar territory for the singer-songwriter. With no bells and whistles, Dierks gave an effortless and natural performance of the anthem, showcasing the whiskey-soaked grit in his voice that comes from years of singing. Although most of the country stars who channeled the anthem during the Preds playoff run donned Preds jerseys bearing their own last names, Dierks wore a jersey with the name of the team forward, Kevin Fiala. Kevin was severely injured during the playoffs in April and has not yet returned.

But, Dierks wasn?t the only star who turned out for this important game. He also wasn?t the only country star to perform! Before the puck even dropped, Kip Moore was in the arena?s plaza providing a little pre-game entertainment for fans.

Once inside Bridgestone, fans enjoyed music from Brothers Osborne, and Jason Aldean was on hand to rev up the already electrified crowd.

@brothersosborne Don't mess up, @vincegillofficial is watching diligently Feeling the pressure like @pekka_rinne Y'all killed it. Go Preds!

As tiny as Maren Morris is, she wasn?t the only little fan watching the big game. Son of Little Big Town?s Jimi Westbrook and Karen Fairchild, Elijah, may have been slight on size, but he was extra-large in enthusiasm.

He's not into it or anything…. go Preds! @predsnhl #stanleycupfinals

And it?s hard to imagine a more notable hockey player than Wayne Gretzky. While we aren?t sure if he was there to support the Preds or the Penguins (or just hockey in general), Carrie Underwood couldn?t resist a chance to grab a picture with the NHL legend.

And then this happened… #Smashville

The Predators defeated the Pittsburgh Penguins with a final score of 4-1, tying the series with two wins each. On June 8, the teams return to Pittsburgh for Game 5 and then on June 11, they head back to Music City for Game 6.