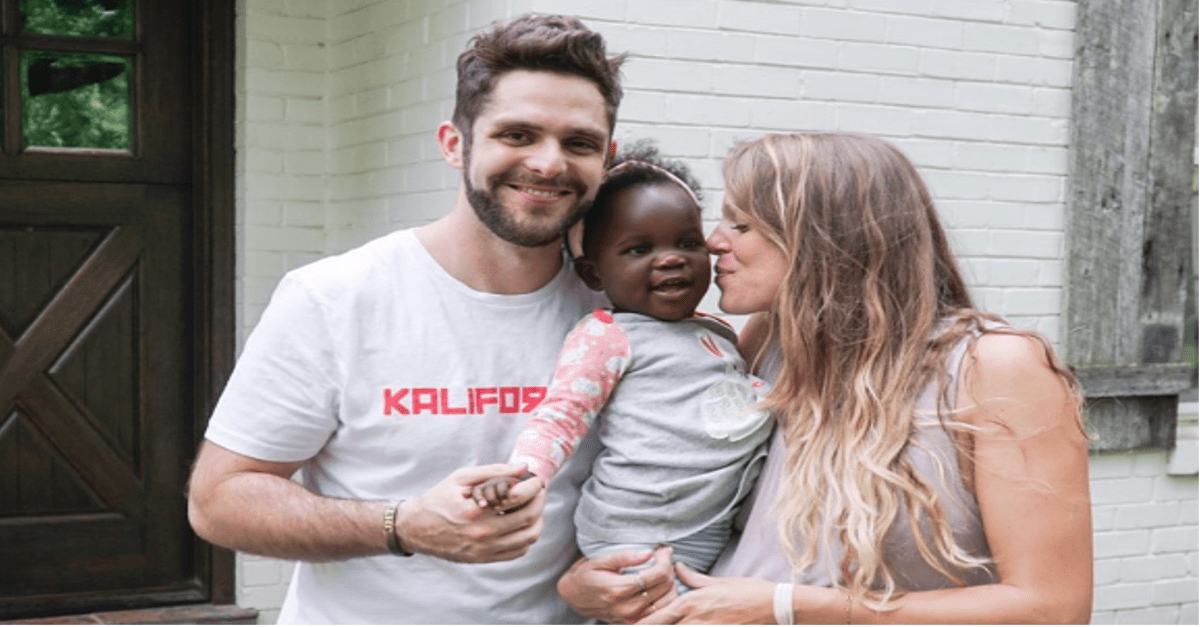 Since Thomas and Lauren Rhett?s adopted daughter Willa Gray came home to Nashville from Uganda, the couple hasn?t been able to hold back their excitement over their new family, routinely sharing pictures of the three of them getting comfortable with their new life together.

YALL 😩🙌🏼😭💗 Our baby girl is hommmmeeeeee 🎈🇺🇸💙🇺🇸🎈 Thank you Jesus for bringing our family together on the same continent finally 🙂 little cutie Willa Gray Akins came home yesterday after completely stealing our hearts in Uganda over a year ago & we're sooooo happy we just can't stand it 💛💛💛💛💛💛💛💛💛💛💛💛💛💛💛💛💛💛💛💛💛💛💛💛💛💛💛💛💛💛💛💛💛💛💛💛💛💛💛💛💛💛 • • • **PARENTS OF THE YEAR: thank you mom & dad for bringing her home since this pregnant mama is officially grounded due to baby Akins #2 coming in August 😩💚💚 • • • **FRIEND OF THE YEAR: thank you sweet @kaileydickerson for capturing some of the most special moments for us & for traveling with me to Uganda and back😘💗💗 • • • ** our FRIENDS & our FAMILY OF THE CENTURY: y'all have walked through and prayed through every single moment of this adoption with us, were our ROCKS through it all, kept it a secret, and truly had faith & hope for us when we felt like we had none left. I could cry thinking about each one of you-y'all know who you are & we are beyond blessed with our community God has given us🙏🏼 we love y'all more than any words could come close to describing. I might just throw you all a giant party celebrating y'all 😭😭💪🏼🙌🏼😘😘😘😘 • • • BRB STILL FREAKING OUT OUR DAUGHTER IS HOME 🇺🇸🇺🇸🇺🇸😩🌈👼🏾💪🏼🎉🙏🏼😭🙌🏼💚🎈💗💗

Yet, according to an interview with People Magazine, the two say it hasn?t been easy.

RELATED: Looks like this little one is following in her daddy Thomas Rhett’s footsteps

?I don?t think anyone can fully prepare you for the journey of adopting someone, especially from a third-world country where there are so many different laws,? explains Thomas. ?Every day you wake up with a whole new set of challenges that you never even heard of.?

And for Thomas and Lauren, there were plenty of challenges besides the adoption laws in Uganda. Once they received the news that Willa would legally be theirs, they still had to find a way to foster the baby in the country of origin over the span of a year. And with Thomas? busy schedule, that meant that he was often forced to return to the states and leave his girls behind.

?When I left Uganda, it was a terrifying moment,? Thomas says. ?I knew I had to go play shows, but Lauren and her mom Lisa were literally there indefinitely.? That?s a scary place to be in as a husband? being 7,000 miles away from your 25-week-pregnant wife and your daughter, not knowing if they were going to come home in two weeks or two months.?

Things got even more difficult when Lauren, pregnant with the couple’s first biological child, also had to return home for a much-needed doctor?s appointment. ?It felt weird leaving one daughter and making sure the other one is okay. But I couldn?t do it another way,? Lauren adds. ?It killed me not being able to bring [Willa] home, but looking back, I think it was a blessing in disguise because I got to be home and nest before she got here ? and catch up on my sleep so I wasn?t so jet-lagged!?

?Seeing her there felt like a dream,? Lauren recalls.