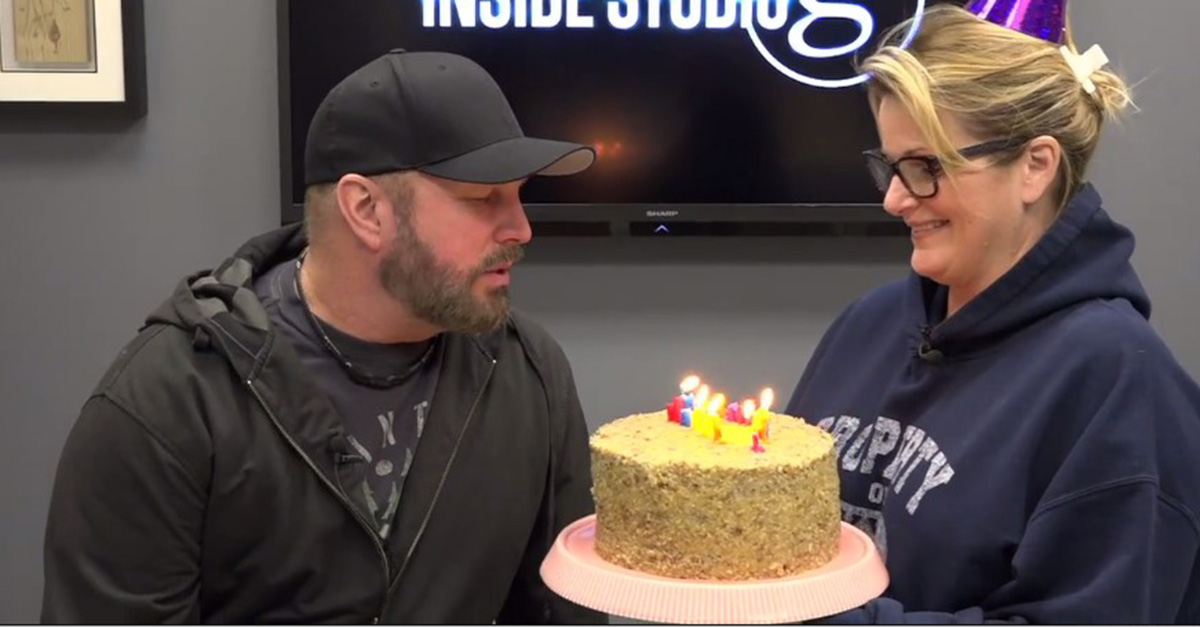 When it comes to surprising people, Garth Brooks is country music’s king. He loves to his band, his crew and even wife Trisha Yearwood with sweet gestures. And, of course, he loves to surprise his fans by announcing shows or special appearances at the last minute.

But during his Feb. 6 “Inside Studio G” on Facebook Live, the surprise was on Garth.

The country star’s birthday is actually on Tuesday, Feb. 7, but Trisha got the jump on it and on him by letting his fans in on the celebration. With a gentle knock on the door, Trisha came in wearing a party hat and carrying Garth’s favorite, a German chocolate cake, with candles blazing. Trisha laughed as she sang “Happy Birthday” to her handsome hubs, explaining that she had been standing outside for a while and the candles had melted down to being unreadable.

After a wish, blowing out the candles and receiving a sweet kiss — we love it when they kiss — Trisha explained that she has made Garth a German chocolate cake for his birthday every year since they’ve been together. She also said that even though his birthday wasn’t until the next day, she wanted his “Studio G” fans to be able to celebrate with him.

Fine with Garth, but he made it clear, she wasn’t getting the cake back. In act, he revealed that sometimes she makes a second cake, too — carrot cake!

We also noticed that while Garth always calls Trisha “The Queen,” apparently, she calls him “The Boss.”

Source: Getting to know Garth Brooks | Rare Country by Rare on Rumble

The real celebration comes on Garth’s actual birthday when the country superstar says his wife always spoils him rotten. However, when one fan asked him during the Facebook Live where he would go for his birthday if he could go anywhere, he replied, “Wherever Ms. Yearwood is is home for me. And my last breath on this earth, I hope I’m wherever she’s at.”