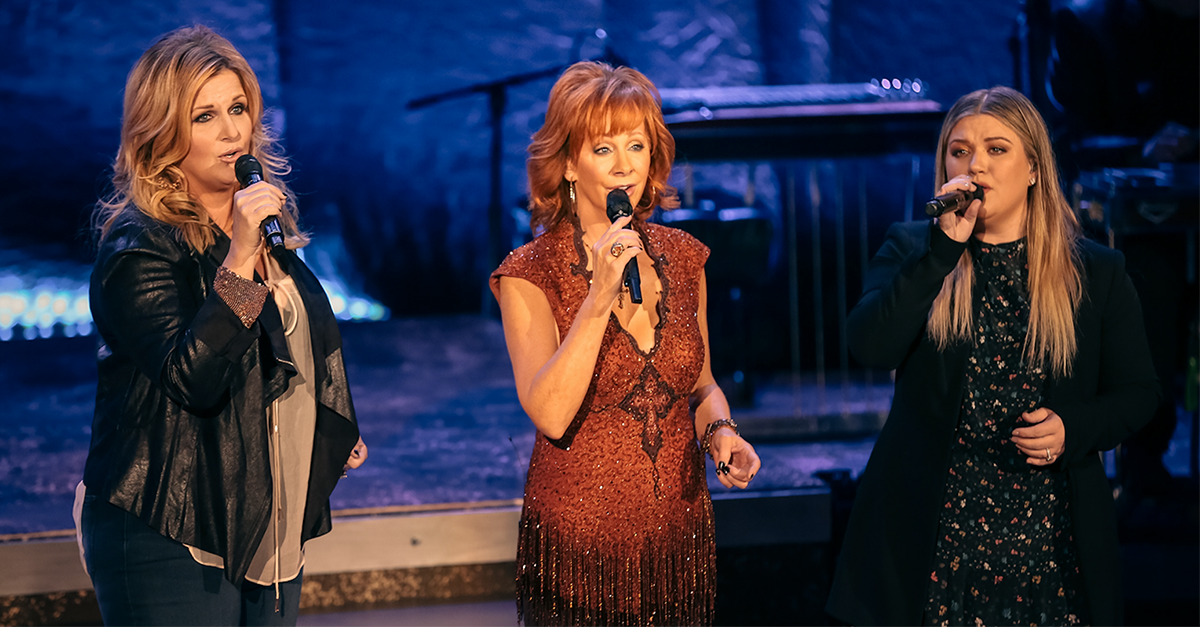 Reba McEntire took over Nashville’s Ryman Auditorium for two shows Feb. 15 to showcase music from her new album, “Sing It Now: Songs of Faith & Hope.” That project features her collaboration with Kelly Clarkson and Trisha Yearwood on the hymn “Softly and Tenderly,” and those two divas made a surprise appearance during the show to deliver this stirring performance.

It was truly a magical moment, and Reba was thrilled to have her girlfriends singing with her onstage. We recently asked her what it felt like to sing with Kelly and Trisha.

RELATED: Reba McEntire tells us her pal Kelly Clarkson is a pro at keeping her kids in line

She told Rare Country, “I don’t know what to compare it to. It is just magical… sweet. It’s like, if you put all the ingredients in to bake this magical cake and it worked out everybody liked it. I don’t think that even holds a candle to the description of how much fun it is to sing with those two girls.”

@Reba's mom and sisters, Alice and Susie, just joined her to sing "I'll Fly Away!" 📸: @nashvillehk

Reba also welcomed her mom, Jackie, and sisters Alice and Susie for a tender moment performing the hymn “I’ll Fly Away.” The sisters got to talking and telling stories, and Jackie was the one keeping them in line, telling them to hurry up and sing the song. It was a hilarious moment.

Holy crap! @reba and @lindadavisnashville doing "Does He Love You." Who's got the smelling salts? I'm out.

Reba’s “Does He Love You” duet partner Linda Davis surprised the crowd to sing their Grammy-winning collaboration from 1993. It was just like old times as Reba and Linda circled each other singing the song about a man’s wife and the other woman vying for his affection.

Throughout the two-hour show, Reba delivered a heavy dose of her new faith-based music, including her latest single, “Back to God,” and the inspirational “God and My Girlfriends.” The evening also served as a fun-filled hit parade with Reba singing everything from her first No. 1 hit, “Can’t Even Get the Blues,” to her latest mainstream hit, “Going Out Like That.”

Of course, Reba couldn’t do a show without singing “Fancy,” and she saved that barn burner for the finale. Only Reba could pull off opening a set with “Jesus Loves Me” and closing it with a song about a hooker who made it against all odds.

There were cameras all around the Ryman Auditorium, so we’ve got our fingers crossed Reba will be sharing this once-in-a-lifetime concert with us as a DVD release or TV special very soon.