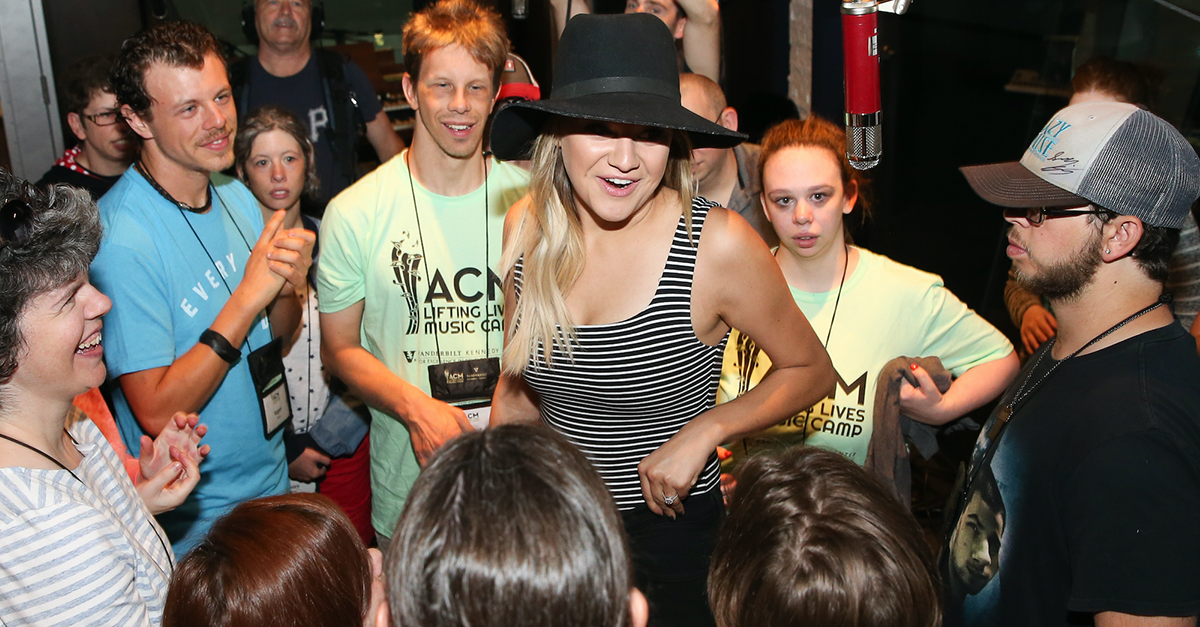 Every summer, the Academy of Country Music teams up with a few big country stars to write, record and perform a song in Nashville with the campers at the ACM Lifting Lives Music Camp. The week-long program is open to people with Williams Syndrome, a genetic condition that can cause medical problems, but also causes those affected to have highly social personalities and an affinity for music.

Dierks Bentley kicked things off this year, helping the campers write and record a new song, “I Love Big.” Rare Country was there as the campers played the song in the recording studio for Kelsea Ballerini on June 26.

RELATED: Kelsea Ballerini says goodbye to a really special time in her life with this performance

As you can see in our Facebook Live video, Kelsea and the campers hit it off immediately. They spent quite a bit of time just chatting and posing for photos before presenting the song to her. As a hit songwriter herself, Kelsea was highly impressed with the campers’ talent.

She tells Rare Country, “They wrote it in an hour and then they recorded it. I’m like, ‘Listen, I can’t record it that fast.’ I was so impressed, and it was so good.”

RELATED: Kelsea Ballerini proves she can roll with the punches in this insane boxing video

Over the years, everyone from Carrie Underwood and Luke Bryan to Darius Rucker and Little Big Town have taken part in the ACM Lifting Lives Music Camp. Kelsea had seen footage of those stars making music with the campers in years past, so she was eager to get in there and work with them herself.

“That was very cool,” Kelsea says of the experience. “You can just tell that they love music so much. That was so refreshing and awesome to see.”

A few campers even got in-depth with Kelsea about how and why she wrote her No. 1 hit, “Peter Pan.”

She adds, “They want to know where these songs come from and why they were created. That just shows [that] a song ? some people just want to sing along to it in their car, and some people want to know why you wrote it. It’s just so cool how a song can touch so many people in so many ways.”

The ACM Lifting Lives Music Camp wraps up with the campers performing “I Love Big” with Chris Young live at the Grand Ole Opry on June 27.