Your favorite country stars celebrate an exciting night in Nashville 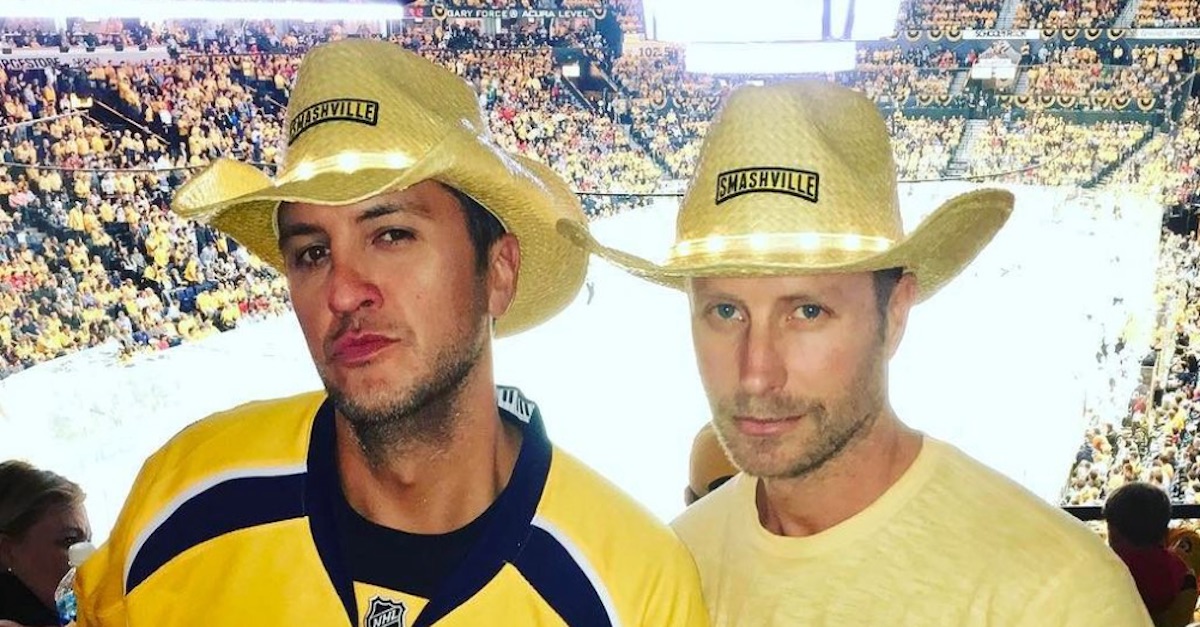 April 20 was a big night in Nashville, as the city?s NHL Predators faced off against the Chicago Blackhawks in the chase for the sport?s ultimate victory, the Stanley Cup. And in addition to Luke Bryan, who performed the national anthem, the country music community was out in full force both at Bridgestone Arena and on social media to support the gold and blue.

In fact, longtime Preds fan Vince Gill was right at the edge of the ice to congratulate his anthem singing buddy when he stepped off after performing “The Star Spangled Banner.”

Meanwhile, Luke?s pal Dierks Bentley, an accomplished player for the adult hockey league?s Nashville Iceholes, was in a suite waiting to celebrate the team?s impending win with his friend.

I don't think we should take all the credit but I will say once @lukebryan and I put these hats on the @nhlpreds s… https://t.co/z9nTu71xDz pic.twitter.com/vrPj9toKyy

Watching the Predators sweep the Blackhawks in round one of the Stanley Cup playoffs was a family affair for Kelly Clarkson and husband Brandon Blackstock. The mom of four shared a selfie with baby Remy, who may have been a little less impressed with the victory than everyone else in Nashville.

Just watched the Nashville Preds sweep the Chicago Blackhawks!! Fun game!! Little man was one of my many dates tonight 😂#MamaTo4 #Smashville pic.twitter.com/hUXv9LnKDF

It seems that all of Nashville is super happy for and proud of the Predators and for Charlie Daniels, that pride just trickled right over to his whole sense of joy for living in Tennessee.

Congratulations to Nashville Preds for sweeping Chicago Blackhawks. Ain't it good to be alive and be in Tennessee pic.twitter.com/tUcS6xkyqM

It?s hard to imagine that anyone is more happy and proud, though, than the wife of Predators’ captain Mike Fisher. Carrie Underwood had the honor of singing the national anthem at the third game between her husband?s team and the Blackhawks, but for the final game in the sweep, she got to sit back and enjoy. She also showed a little bit of her competitive side in this snarky tweet.

This was just round one of the playoffs and now Nashville waits to see who wins between the Minnesota Wild and the St. Louis Blues to see who they?ll face in round two.