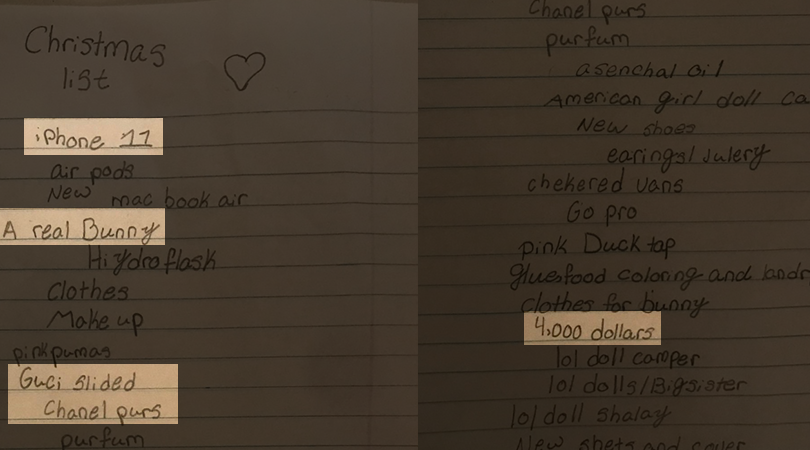 A 10-year-old Los Angeles girl who either deeply believes in the magic of Santa or has the economic literacy of, well, a 10-year-old from Los Angeles, handed in a Christmas list for the ages to her dad. The dad then proceeded to immediately share the exorbitant wish list on his Twitter account, @A_Johnson412.

The little girl’s Christmas list reads pretty much exactly like you’d expect an insane list of demands from a 21st Century 10-year-old girl would read. It’s got iPhones, bunnies, jewelry, fashion, and… four thousand dollars cash, because what kid doesn’t want a couple stacks for Christmas?

My 10 year old daughter must be out of her mind with this Christmas list 😒😒😒 pic.twitter.com/Qqsje79rda

Air Pods
You have to be a teenager before you can actually start appreciating music so I’m guessing these wildly expensive headphones are for status purposes only. It would surprise me roughly zero percent if your headphones having wires were a reason kids got their asses kicked at school now.

A New Macbook Air
Literally useless in the hands of a 10-year-old.

A Real Bunny
Somehow the living thing she could kill if she doesn’t take care of it is the most responsible ask on the whole list.

Asenchal[sic] oil
Maybe toss in a Hooked on Phonics instead. (That was mean, sorry.)

But honestly, more than asking for expensive headphones she only wants for appearances, a high-end laptop she has absolutely no need for, or even the $10,000 sum total of her list, her asking for Essential Oils is what really tells you this girl has no regard for the value of a dollar.

Clothes for Bunny
Ah, so that’s how the bunny is going to die. Strangled by a tiny sweater.

4,000 dollars
This girl is rad, actually. Just casually slipping four grand into the list like a boss. Clearly, she already understands the Overton Window and the art of wildly over-asking in a negotiation to make the outcome more likely to end up in your favor. This girl is going to be a CEO one day. The kind you see testifying in front of Congress, probably, but still.

Watch: Hundred-Year-Old Letters to Santa are Both Humorous and Devastating