A 3-Legged Alligator Followed a Woman Home from Golf Course, Sat Outside Her House for Hours 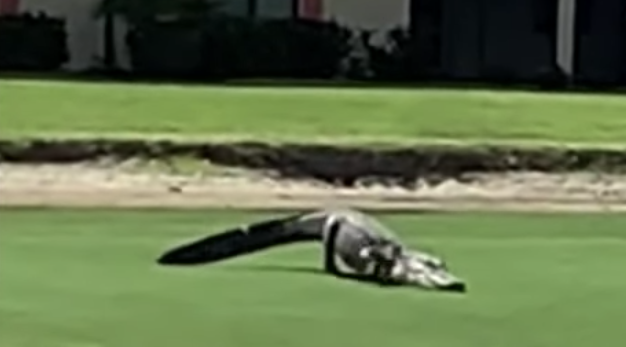 A Florida woman got what has to be a pretty terrible omen. The sort of thing that would cause some ancient Egyptians, Native Americans, or Greeks to absolutely shun the person it happened to out of fear that they might end up too close to whatever calamity ends up befalling the newly cursed person. I mean this gator could enforce some social distancing with the way this alligator hobbles towards people.

A 3-legged alligator plodded slowly and directly towards Lori Greenberg as she played on a Florida golf course near her home in Bonita Springs, Florida. According to ABC7, as the alligator hobbles across the golf course, it proceeded to follow the woman home, sitting outside her house. For hours. Staring inside. Both her home and her soul (probably). If that’s not a metaphor for impending death I don’t know what is. I would set up some sort of home confinement.

Yeah, lady, maybe don’t get on any planes for a while. Absolutely do NOT go swimming. Make sure you cut all your food up into especially small pieces. Change all your personal information. Get the hell out of Florida, actually (but not via plane!). Go hide and lockdown in a Holiday Inn in Iowa until this all blows over. Maybe drive up to New York or even Rhode Island. And if the alligator shows up outside of that I suggest seeking advice from priests of both the Catholic and Voodoo persuasions.

Even if this gator isn’t some sign from the devil it’s still unnerving. It’s a three-legged gator that will stop at nothing to eat this lady. The fact that it has three legs makes it especially terrifying. This thing has been through some stuff. It’s definitely not going to be intimidated by this woman or anyone Lori Greenberg lives with shouting, “Get out of here” or shaking a baseball bat at it from the porch. The only option is to kill it, have it butchered, and consume its flesh. Those are the rules in Florida.

In the meantime, this woman should head on down to her local gun store and ask the proprietor, “Hi, I might need to kill an alligator that’s stalking me and also may or may not be the very embodiment of death. What do you recommend I buy to kill death with?” And after she buys that AR-15 she should use it as soon as possible.

Editor’s note: This article was originally published on May 15, 2019.