Listen, when it comes to candy, 4-year-olds will do anything to get it. And by anything, I mean they will physically steal their great-grandfather’s SUV to drive to the gas station and get that sugar rush they so desperately need. Which is exactly what little Sebastian from Blaine, Minnesota did on a Tuesday morning, during rush hour traffic. The 4-year-old boy, who is incredibly lucky he is okay, was able to take his great-grandfather’s Hyundai Santa Fe out of the driveway and make his way through neighborhood streets and drive on a busy four-lane street.

This is truly impressive. I can’t even do this on a busy morning without getting anxiety because of all the cars coming left and right, this Minnesota boy is a true hero. The boy apparently took the keys from wall hooks using his great-grandfather’s walker. According to his boy’s great-grandpa Roy Becker, Sebastian usually watches everything people do, and he’ll repeat it. So yeah, grabbing the car keys, getting behind the steering wheel, putting on his seatbelt, and getting in an SUV in search of candy was no problem for this adventurer.

According to Fox9, witnesses reported to the Blaine Police Department that someone was driving “erratically” around 10 mph to 15 mph, but it wasn’t until Sebastian pulled up to the Speedway gas station, when police realized there was child behind the wheel. Which is amazing because one, he made it to the gas station parking lot safely, and two, he actually knew the way to the convenience store!

Of course, his driving wasn’t flawless at all, after he took out a few mailboxes and dinged a tree along the way during his 1.5-mile trip. But heck, the car insurance will take care of that, right? Just call Flo from Progressive.

As far as his punishment? Well, he’ll get no candy for at least a week, and the family said they are locking the car keys from here on out so Sebastian won’t get a hold of him. But, can you imagine when this kid turns 16? If he’s stealing the car now to get candy…what makes you think he won’t steal them again to go buy some weed or pick up some friends so they can all go be rebels at the drive-in and go for a joy ride? Better keep a closer eye on this one!

Ah, little Sebastian. You have a bright future ahead of you, I hope those Twizzlers were worth it, kid. Talk about a powerful sweet tooth.

Editor’s note: This article was originally published on June 17, 2019.

Watch: An 8-Year-Old Made $26 MILLION This Year Reviewing Toys on YouTube 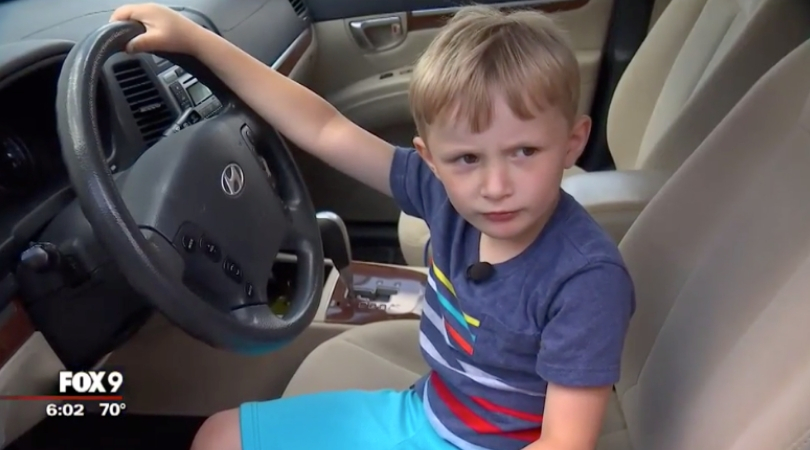