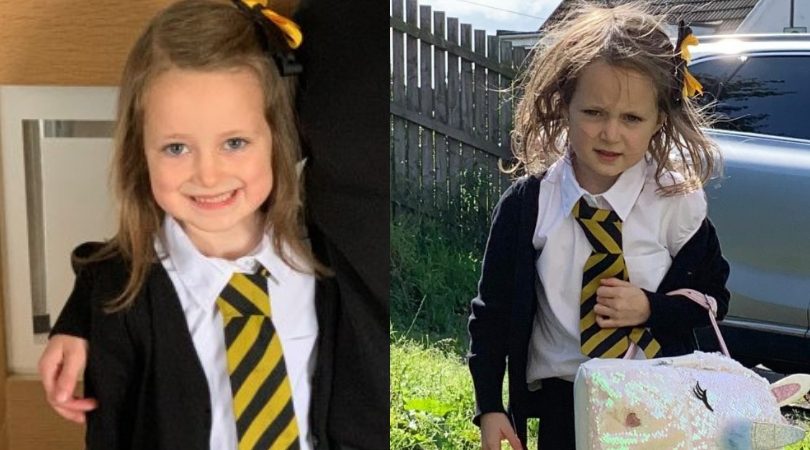 Via Metro
Via Metro

5-Year-Old Lucie Falconer clearly didn’t want to go back to school. She wanted to keep on sleeping in till 11, eat an unlimited amount of snacks at home, and watch all the cartoons she could. But no, it was back to learning for this little one, and luckily, Lucie’s mom was there to capture her before and after arrival.

Safe to say it wasn’t a typical school day for the little rascal. Lucie, who is from East Renfrewshire looked sparkly clean wearing her school uniform before she left home, tie and all. But, by the end of the day, the 5-year-old is seen as if a tornado came, swept her along, and spit her out right then and there. Poor little Lucie was pictured slouching as she arrived home, her hair an absolute mess with a hilarious scowl on her face.

Best back to school photo ever.
BBC: When the 5-year-old's mum asked her what she's been up to, she answered "nothing much". 😂 https://t.co/sdnJuRxxG1 pic.twitter.com/6AAb2NRuKU

According to her mother, Jillian Falconer, the girl loves school and was eager to start her day in Primary two. So much so that she was excited to wear her new clothes. When she saw the “state” of her daughter when she arrived home after school, she was shocked since it looked like the girl had been in an altercation. She quickly asked her what she was up to, to which the girl replied, “Nothing much. Just playing with my friends.” Which kind of worries me, because if she was playing and this is how she turned out, imagine when she actually does get in a fight.

Jill, a mother of three, sent Lucie’s father the photo in shock. Of course, he thought it was funny, so they decide to share it with their family and friends. After that, the photos quickly surfaced online and went viral in a matter of seconds, because well, they are hilarious. I hope Jill takes pictures of this little Lucie all throughout High School and makes a collage or something.

This article was originally published on August 3, 2019.