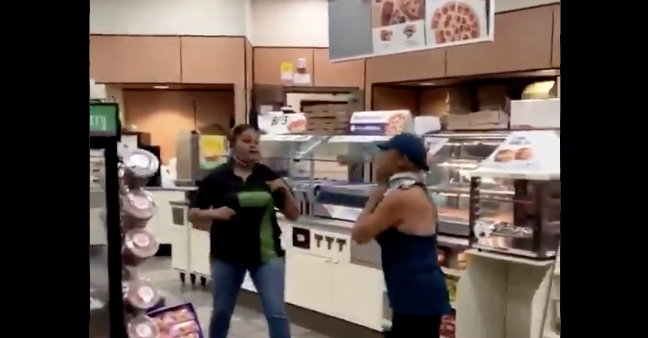 A 7-Eleven store clerk in San Antonio, Texas was captured on video serving up a new flavor of Slurpee to an unruly customer: Ice Cold Beat Down.

An employee at the 7-Eleven on San Pedro Avenue in San Antonio was filmed getting into a physical altercation with a customer who was acting in a hostile manner toward her. The customer, presumably operating under the assumption that she could say whatever she felt like to the female 7-Eleven clerk, did not expect what came next.

The video then cuts again, to the 7-Eleven employee making the understatement of that evening: “Don’t fuck with people from 7-Eleven.”

And really, why would you? If you come at a 7-Eleven employee you better come correct. These people go into every shift knowing there is a non-zero chance they get a knife or gun pulled on them. And you’re going to come at them with fists? With mere hands to throw? Yeah, no. That’s a good way to get yourself absolutely wrecked, as this one customer found out all too quickly.

Gas station employees don’t have time for your shit. Gas station clerks wish they only had to deal with the nightmare customers waiters and waitresses describe on a daily basis to the amusement and disbelief of the rest of us.