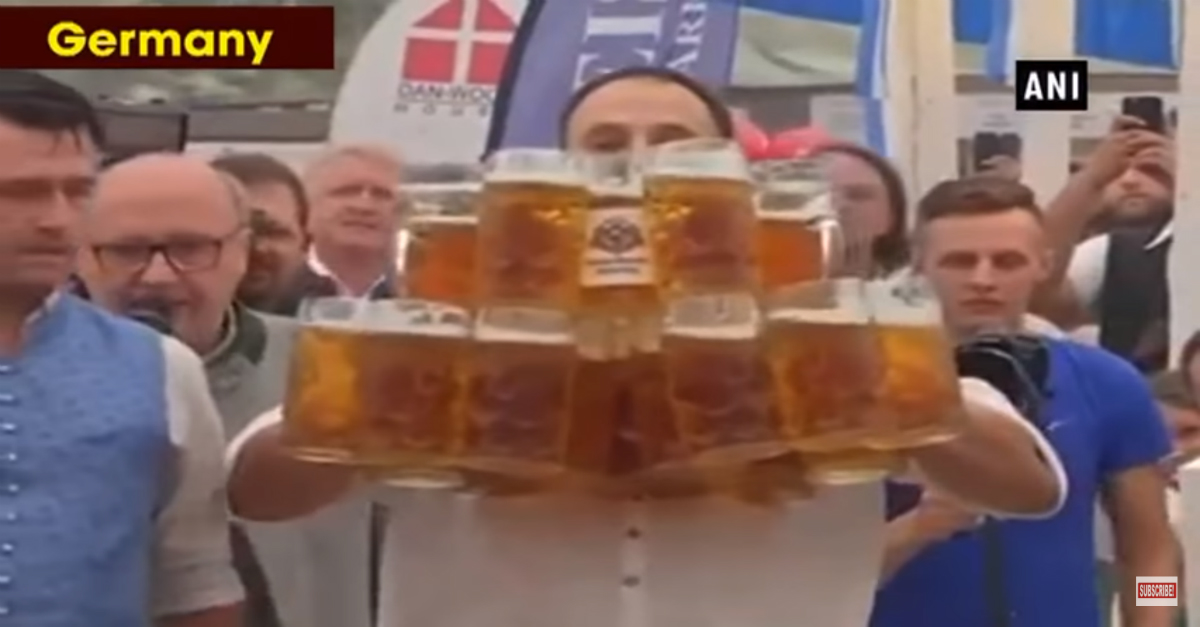 A new world record for beer stein carrying was set when a German waiter carried 29 steins filled with beer for 40 meters.

Oliver Struempfel broke the record at a Bavarian festival in the town of Abensberg, Germany, a part of the world that really loves beer, as Reuters reported. He also held the previous world record, carrying 25 beer steins in 2014, Munich daily Merkur said. In order to complete the challenge, he could not spill more than 10 percent of the beer.

?I first did 27, because I wanted to be sure, and then at the end I said, ?Let?s add another one and get over 30,’? Struempfel told Reuters, ?Unfortunately it didn?t quite work, but having managed to put 29 down… I think it?s amazing.?

And it is amazing in Bavaria, which holds Oktoberfest, the world’s biggest beer festival. Struempfel held 31 tanks filled with beer and walked a whopping 40 meters before setting them down.

In Bavaria, which is also home to Oktoberfest, the world?s biggest beer festival, Oliver Struempfel cradled 31 beer-filled tankards stacked up in two tiers, walked 40 meters and then set them down. Two of the tanks tipped over, which capped his beer-carrying record at 29 jugs, but it still beat his own world record.

Struempfel said that he would train at the gym, “three to four times a week since February,” for this attempt, ?When I think about it, it?s 200 hours for about 40 seconds of walking,? saying after he beat his previous record. Talk about cultural dedication. Germany clearly takes their beer very seriously.

I couldn’t imagine even holding more than three of those beers in each hand or even stacking them on top of each other as Struempfel did. I wouldn’t even try for the sake of wasting beer because, I mean, how dare I even waste beer at a beer festival, am I right?!

Watch: Every Pint of Beer You Drink (After Your Recommended Weekly Intake) Takes 15 Minutes Off Your Life