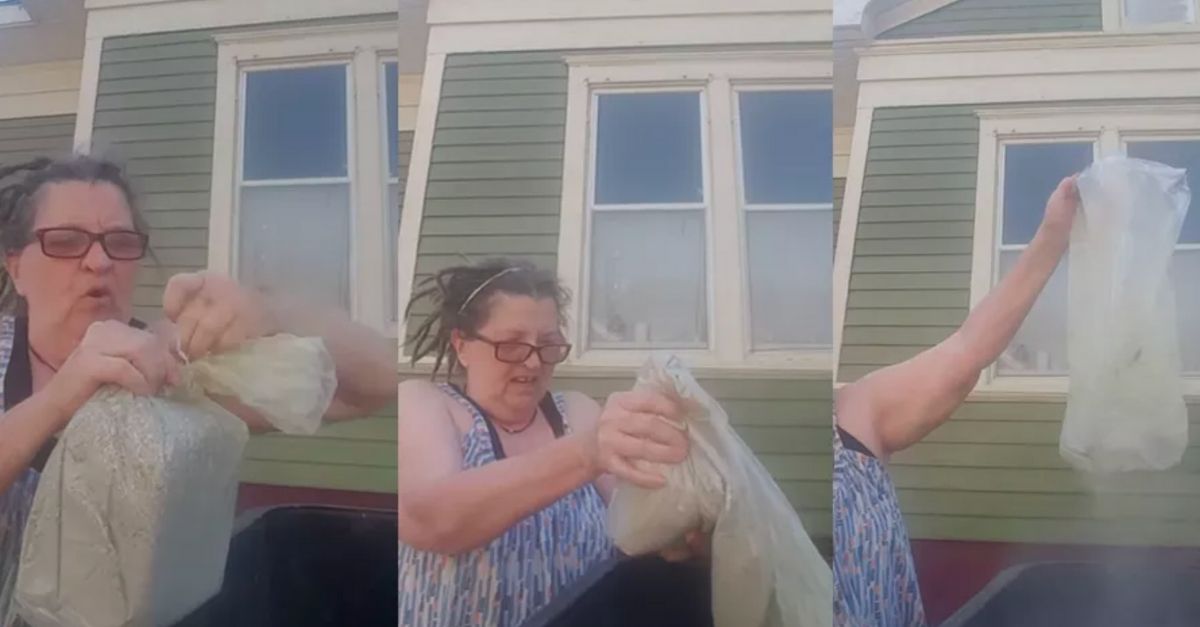 Well, this is different. This woman seriously took the comment, “throw the whole man in the trash,” very literal. Usually, when a loved one dies people handle their death in very different ways, most usually decide to share a very heartfelt tribute, pictures, or video showcasing who they were in life.

But this woman decided to celebrate a little differently after her abusive husband passed away. Marsha Widener Took to social media, posting a video saying, “I know you’re not going to understand why I’m doing this,” while showing a box at the camera.

She then explains that they are the remains of her husband, Don Widener. She stated, “his family don’t want him, his brother doesn’t want him around, his kids don’t want him, actually, they want him to go in the gutter or the toilet.” Marsha then reveals that Don, who was a garbage man, brought trash from businesses to the landfill and that she will now send him to a landfill.

As she unties the bag holding his remains, she quickly dumps all the ashes, saying it was for all the pain and the turmoil that he caused their children, her, and his parents. So, there she is just pouring them inside the trash can as if nothing. She notes, “This is for all the times he kicked me in the head – yup, he put my head through a window.” The ashes fall on the ground and she grinds them into the dirt with her foot, emptying the rest into the bin while throwing the bag inside, saying, “adios amigo.”

Honestly, I’m not even mad about this whole situation. It sounds like Don was pretty much of a jerk, and this woman had every right to do what she did. Sure, she might have been a little nicer, but if the guy made her life a living hell, and their children a living hell, I’m on team Marsha for this one.

I’m really hoping her life is so much better without Don in it because it sounds like he was trash. You know what they say, treat people the way you want to be treated. Also, I appreciate the title of the video being, “Final goodbye to the NASTY BASTARD.” A masterpiece.