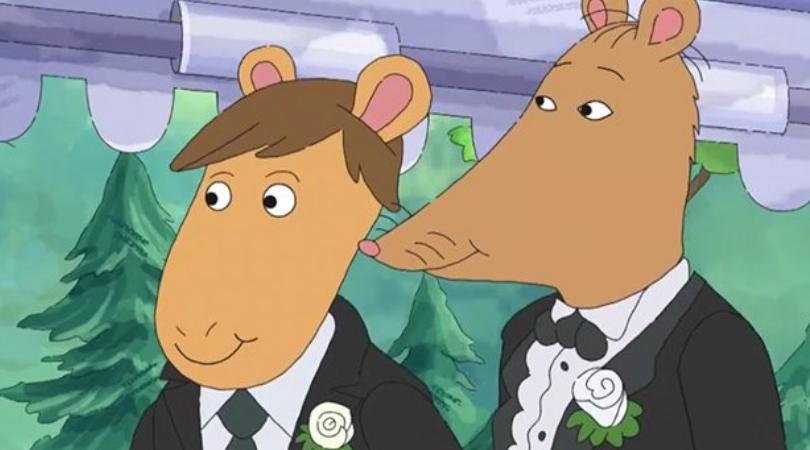 In an effort to save some Alabama parents from an astoundingly easy to avoid conversation, Alabama Public Television has refused to play the newest episode of the children’s cartoon “Arthur”, which features a gay wedding. Between two men. Two men who are gay. With each other. And, presumably, these two gay men have sexual intercourse with each other, though the animators neglected to portray any boning.

Obviously this is problematic because… even the most socially conservative of Alabama parents are too dumb to fib or change the subject if their six-year-old asks them why two men are getting married? Basically the problem here is that seeing two men (or women) together brings images of sweaty, passionate sex to the forefront of adults‘ minds whereas seeing a married man and woman (who also definitely fuck) does not. Why?

Because. That’s the only answer, really. Just because. Heterosexual relationships have been effectively sanitized in society and media, so they don’t immediately conjure images of two people going at each other like drunk monkeys. But when geniuses see two men or two women with each other the first thing that comes to their mind is, apparently, “They use their privates dif’rent on each other I wonder what that looks like.”

You know what you could do instead of that? Not that. The opposite. Think nothing. It’s super easy.

And rest assured that even though these images may be running through your head, concerned parents of Alabama, it’s unlikely your first-grader is picturing an anthropomorphic rat going down on his partner.

Even still, some Alabama parents are frightened and upset at… the prospect having to explain the entire concept of homosexuality should their kid ask about it? As if little Timmy asking, “Why are those two boys holding hands?” is going to require the parent to give detailed explanations about lube, twinks, and power bottoms. They’re little kids. Lie to them. Change the subject. Turn off the TV and never watch the show again. It’s not hard to distract them. How bad are you at this, offended parents of Alabama?

Alabama Public Television programming director Mike McKenzie said broadcasting the episode of “Arthur” would break parents’ trust in the network. So they censored something because some people complained. Cool.

The only thing disturbing about this episode is that these two dudes invited a bunch of kids to their wedding. Not because the wedding is for two men, but because who the hell invites that many kids they’re not even related to to their wedding? It’s just weird, Ratburn. It’s a party not your school’s field day.

Watch: Mr. Ratburn from PBS’s “Arthur” Comes Out as Gay, Gets Married in Season Premiere