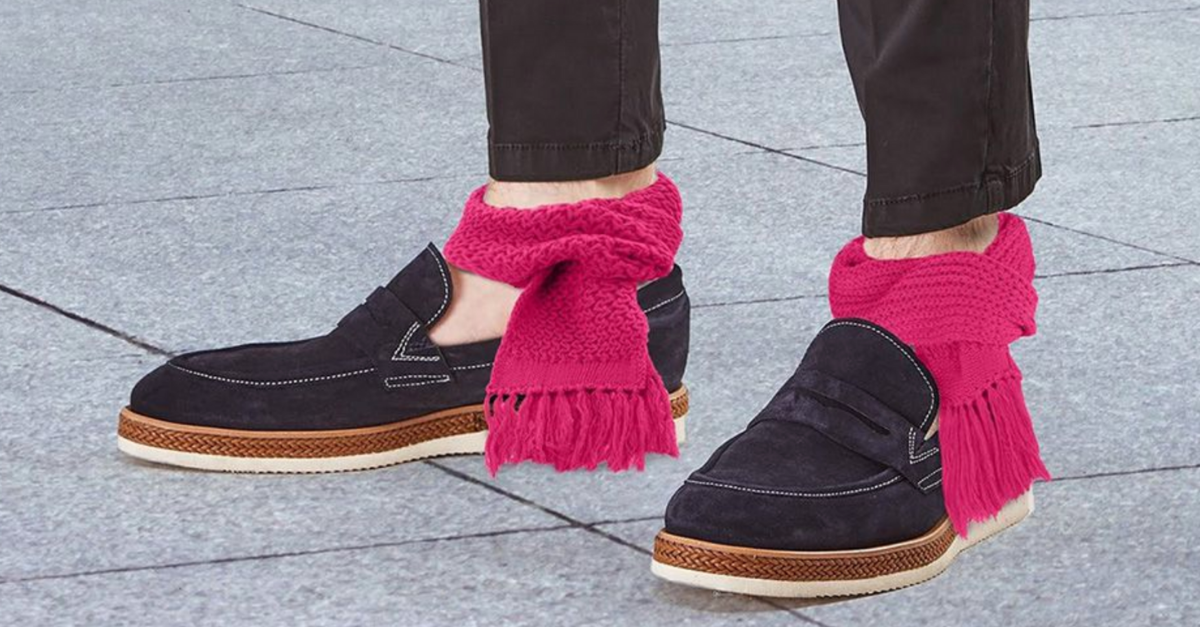 Nah. No. Nope. Absolutely not. This is a fashion troll. No decent human being would wear these. If you see someone in Ankle Scarves you place them under citizen’s arrest. If this catches on I will literally buy a van and drive around my city abducting ankle scarf wearers. I’ll throw them in my van, put a bag over my head, drive them to the ocean, and set them adrift on a raft to live in exile forever. This is insanity.

There are few if any other things you could wear that are worse than these. All that’s coming to mind are, “A human skin jacket made from orphans you murdered” and “an actual SS Nazi uniform.” It would be more acceptable to walk around naked than to wear ankle scarves. Don’t even think about it, you monsters.

What’s insane is that this started out as a joke from the German satire site, Der Postillon. Think of it as Germany’s version of The Onion. Somehow, though, someone thought this was actually a cool idea and the joke article took off on social media. Just think, in arctic-esque temperatures, it’s better to wear a tiny scarf around your frozen ankles rather than something practical like boots.

This hipster shit will not stand. I don’t advocate for violence but assaulting someone wearing ankle scarves should absolutely be able to plead down with a claim of temporary insanity.

“Your honor, I don’t want to hurt anyone but I saw those wrapped around his ankles and I just fucking lost it. I… I don’t know. Everything went red and then I woke up standing over a pile of teeth and blood.”

It’s not right to discriminate but, also, if these people walk into your business DO NOT SERVE THEM. You tell them that your establishment is for good, ankle-free fashion Americans only. Get your fake news out of here.

We deserve global warming. That’s all this fake trend is showing me. I no longer believe we were created in God’s image. Scientists say we’re made of stardust, but maybe that discarded stellar matter is actually just existence’s shit. Feels likely… now.

Watch: 11 Dogs Who Are Absolutely Determined to Stay Warm This Winter