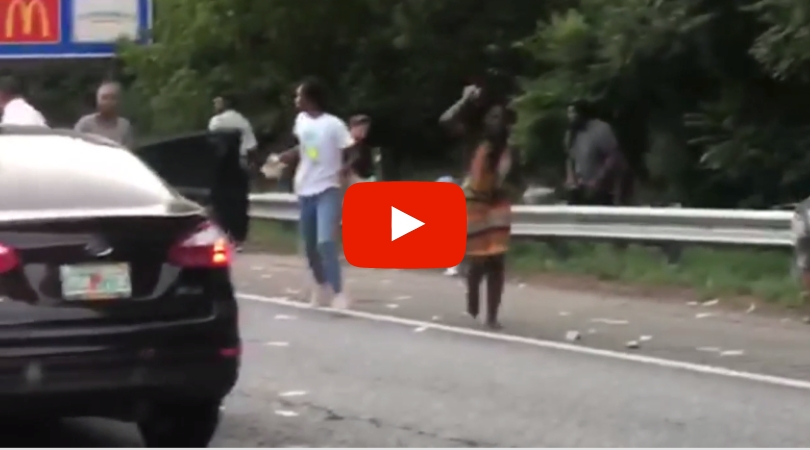 Picture this, you are driving on the highway just minding your own business, drinking your delicious iced coffee trying to get to work. Then, out of nowhere, you see money falling from the sky. Yes, pure hard cash just going with the wind. What do you do? Well…you stop of course!

At least that’s what these Atlanta drivers did after cash was literally flying around a busy highway. The money apparently came from an armored truck! The car was traveling on 285 West when the side door came open and money flew out on the highway. As to how much cash, well, that’s still unknown. But it is said to have been a “substantial” amount.

CASH CHAOS: Cash was flowing as money literally rained down on a busy interstate near Atlanta. https://t.co/wRQfC5Kigr pic.twitter.com/TfbVwQF9k7

It’s really amazing that no crashes or injuries occurred while people were on the road. The video shows people scattering and running around everywhere like lunatics! Which I don’t blame them. If I was there I would have just left my car right in the middle of the road and sprint to the cash. Can you blame me? It’s free cash we’re talking about here! That poor truck driver must have felt so bad. He must have gotten in so much trouble, too.

According to authorities, by the time they arrived at the scene, the ?opportunists? had already driven off with the money. Dunwoody Police Sgt. Robert Parsons stated that taking money off the road is ?most certainly crime” and are investigating to see how much is missing from the original amount.

The police department then stated that they were going to need the cash back, pronto. Which is hilarious, because of course, these people aren’t going to give the money back! Who are we kidding here? Finders keepers, losers weepers.