YouTube prankster BookOfKen is arguably best known for his hilarious videos involving his girlfriend. In a video uploaded to YouTube on March 3, she was once again the target of a hilarious prank that incorporated not one, not two, not three, but four different acts.

The video opens with just Ken on camera discussing his grand plans to terrorize his girlfriend. The plan is quite simple, sneak into the bathroom like a ninja while she is too busy singing and sudsing up to notice her boyfriend’s presence in the room, then proceed to prank her on multiple fronts.

RELATED: World’s cruelest mom waited patiently outside of the bathroom to scare the bejeezus out of her son

First, the classic flour in the hairdryer trick. Ken looks completely dumbfounded by his girlfriend’s singing as he dumps the flour into the hot hair tool.

Second, Saran Wrap on the door. Most people are probably familiar with this prank’s cousin — Saran Wrap on the toilet seat so the pee goes everywhere. This prank succeeds thanks to the same basic principle, that the victim will not notice it’s there.

Third, pie to the face. This one is self explanatory. Arguably one of the first and best pranks ever. Ken opts for a whipped cream pie.

Last, but certainly not least, a pillowcase full of feathers. Because what’s a face full of whipped cream if it’s not also covered in feathers?

As soon as Ken’s girlfriend turns off the shower, it’s on! Ken has, of course, installed a little video camera in the bathroom to give viewers the full experience of her reactions. Don’t worry though, nothing provocative to see here folks.

The moment she turns on her hairdryer, the prank is already so worth it! From there, everything went right according to Ken’s plan. 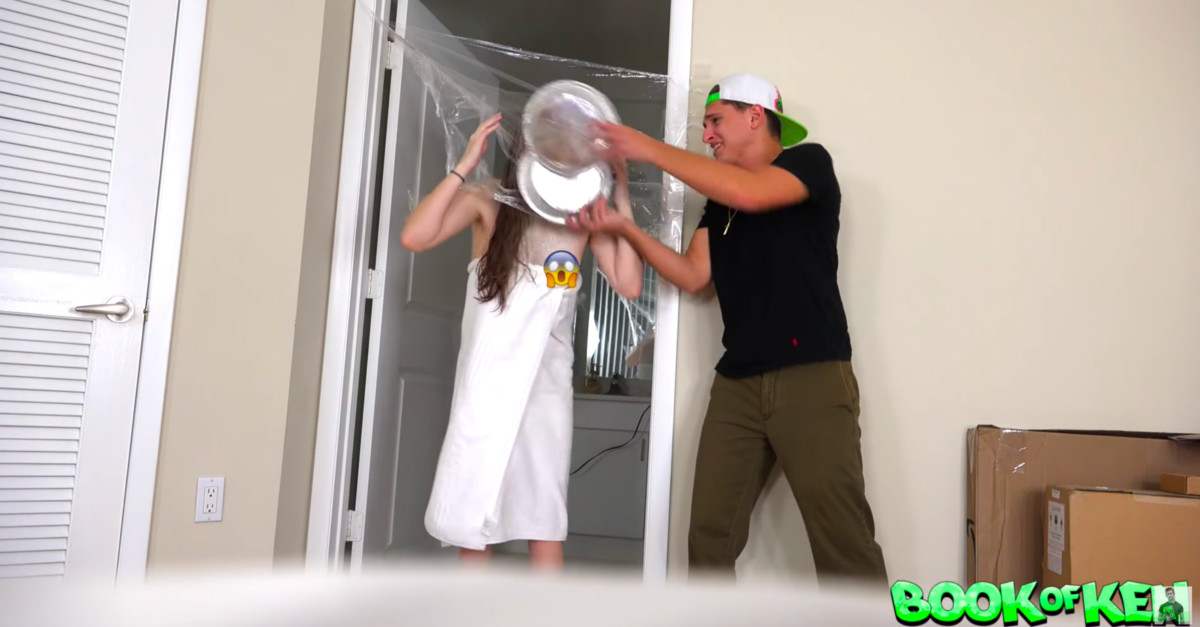