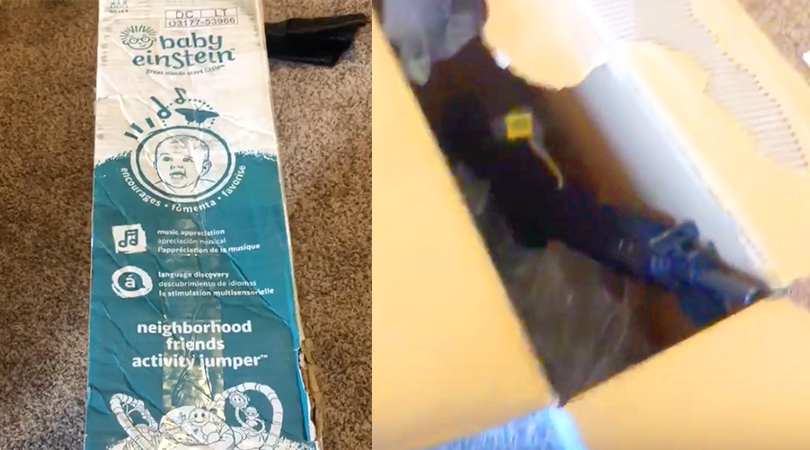 A military wife in Crestview, Florida got a surprising bargain on a Mossberg 715T semi-automatic rifle over the weekend. Surprising because when she spent $9.99 at Goodwill, which has zero donated gun outlets, she thought she was getting a Baby Einstein baby bouncer. That’s what the box said, anyway. She was definitely not expecting to find a loaded assault rifle instead.

But a loaded rifle is exactly what was inside the Baby Einstein box. Found, as it turns out, by the couple to whom the Florida woman gifted the bouncer at a baby shower. The expectant father opened the box and was (more or less) like, “Oh wow awesome you got me a big badass gun! To defend my new baby I guess? You guys are the coolest!”

The woman and her husband, however, were quite adamant that they had not purchased the couple a gun. They had no idea a gun was in the Baby Einstein box. So the police were called. The Crestview Police took photos of the gun but initially allowed the couple to keep the rifle because they already possessed all the proper paperwork to own that sort of weapon. And, also, it’s way freakin’ cooler than some stupid baby thing.

Presumably, however, the police officers who were investigating the surprise assault rifle returned to the station and mentioned what happened to a competent fellow officer or superior, who in turn said something along the lines of, “What the actual shit is WRONG with you!?!? Go back and get the gun. You don’t just let people keep random guns they find! It’s EVIDENCE in a REALLY sketchy situation. Good God.”

So on Monday the officers returned and confiscated the rifle while they investigate the situation.