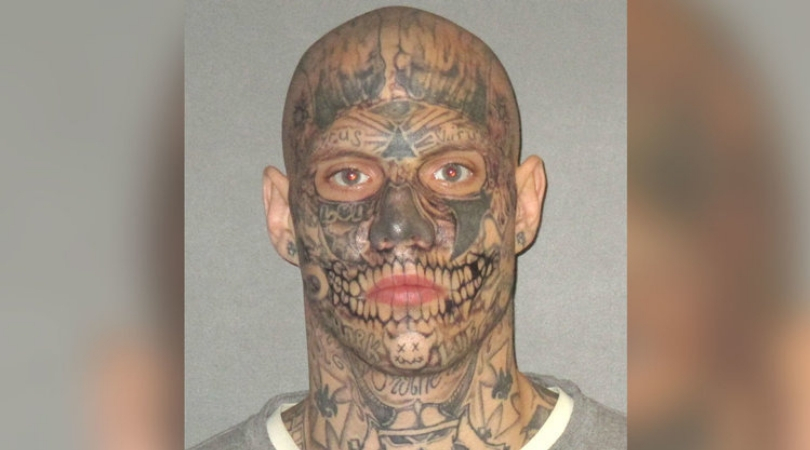 Listen, I am all for tattoos. I think they are a great way to show off your personality and spice up your life a bit. Whether it’s a sleeve,  a subtle neck tattoo that you designed yourself, or that small symbol on your wrist, they define who you are, and that’s cool. And I’m sure tattoo artists don’t judge client’s face tattoos. That being said, I don’t necessarily agree with those who decide to tattoo their faces. Especially if it’s their whole face, because well, it just doesn’t look that good. Plus, what happens if you need to go to a very important meeting, or better yet, a trial.

Like in this new story, where a defense attorney for a Louisiana man who is suspected of second-degree murder is hoping that jurors disregard the highly detailed, demonic tattoos that cover the majority of his clients face. Why is this man in trial? Well, William Bottoms Jr., 29, is accused of shooting and killing two men who police officers found in the back seat of his car back in June 2017.

😆 The point of a tattoo is to express who you are for all to see. The guys “expression” choices should be judged. Louisiana attorney asks for jurors who wouldn't judge client's face tattooshttps://t.co/i3sVXZo4Fy

According to The Advocate, Jarvis Antwine, Bottoms’ lawyer and defense attorney, told jurors that the first thing you see when you look at Bottoms is his tattoos. Clearly. Meaning, that he wanted jurors not to make any possible assumptions based on William Bottoms Jr.’s tattoos on his face. Potential jurors attorney Jarvis Antwine tried to warn, said that they would have no problem with it, one prospective juror called it a “personal choice.”

Personally, I wouldn’t judge him for having skull teeth or devil horns on his face, or even the ones that go into neck tattoos. Bottoms’ tattoos are not the problem. But I WOULD judge him for killing two people and stuffing them in his trunk. Because that’s why he’s there in the first place, duh. He is currently being accused of second-degree murder and is facing a mandatory life sentence if found guilty. His victims, 23-year-old Dedric Dewyane Williams and 29-year-old Mohamed Sead Hussain were found dead in Grangeville, Louisiana. According to authorities, they were both shot in the head and their bodies were only covered by a sheet.

How are you not able to judge someone capable of marking them as such? If you mark yourself wit devil horns, teeth or similar doesn’t that not give us insight into their personality, and what kind of person they are?

Bottoms’ ex-girlfriend, Megan Marie Gaylord, told investigators that her and Bottoms, along with the two dead men, were driving in a car together under the influence of drugs and a paranoid Bottoms shot both men. Despite the testimony of Gaylord, Bottoms pleaded not guilty. Gaylord originally was going to charged as well, but the East Baton Rouge Parish District Attorney’s Office dropped the charge last year. It won’t be breaking news when he is convicted as a felon.

Oh, and the attorney also wants to note that his client should not be mistaken for Bottoms’ twin brother who was killed in April by Mississippi authorities trying to arrest him for being a felon in possession of a gun. They both apparently had matching face tattoos. I don’t know man, I think this attorney’s best bet is hiring a really good makeup artist. But then again, there’s that whole murder bit. So…is it worth it? Maybe Bottoms’ tattoos will keep him safe in jail during that life sentence.

Editor’s note: This article was originally published on August 7, 2019.

Watch: Man?s Pickup Truck Stolen While He Was Busy Robbing a Store