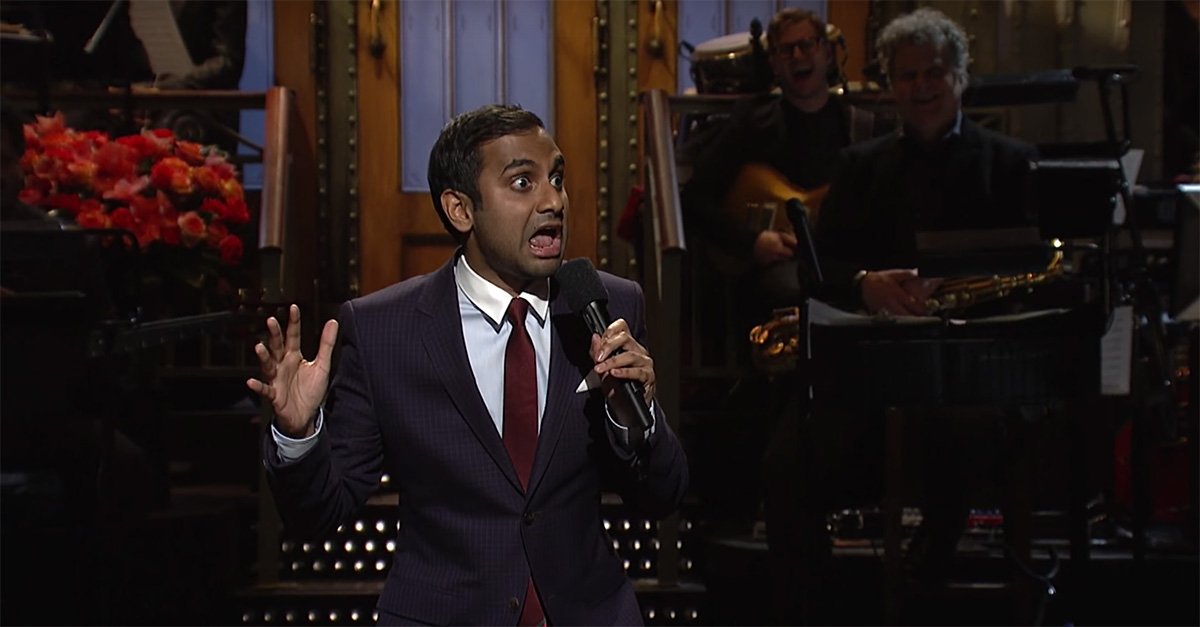 The question was what direction would he take? Would he go follow Louis C.K, and Dave Chappelle and have a short stand-up set ready, or would he do a “regular” monologue? When Ansari entered through the stage door in a suit with a pocket square holding a microphone, it was officially game on. And what did he choose to be the center of his topic? President Trump’s inauguration.

Of course, luck would have it that Ansari’s first time hosting is the day after the inauguration of the SNL’s now-mortal enemy, President Donald Trump. But on the other hand, as he so perfectly put it, “Pretty cool to know he’s probably at home right now watching a brown guy make fun of him, right?” Game on, indeed. “Yesterday Trump was inaugurated. Today, an entire gender protested against him.”

Ansari was then quick to point out that not all 63 million Trump voters were as deplorable as the candidate himself, like how not everyone who bobs their head to a Chris Brown song supports his deplorable-ness. “’I just like the dancing and the music, I don’t condone the extracurriculars!’” And if Trump is the Chris Brown of politics, “‘Make America Great Again’ is his ‘These Hoes Ain’t Loyal.’” It’s a comparison that belongs in the 2017 pop culture time capsule and not at all for the wrong reasons.

He also mentioned how he thinks Trump should “denounce the lowercase kkk,” seriously calling the President to use his platform to help stop these people. He continues on with the seriousness, addressing our country’s history by talking about how George W. Bush addressed in his speech after 9/11 addressed islamophobia, and how he said that America’s enemies aren’t, “Muslim brothers and sisters.” He immediately returns to the comedic bits saying how it’s great how a lot of people who are against Donald Trump’s inauguration are a “part of the largest group of angry people,” to which everyone started laughing. He even went as far as to call former President Bush a “dildo.”

“Change comes from large groups of angry people,” was the beautiful statement he garnered to the tv show audience. Like his stand-up, Ansari’s monologue was both bitingly on point and absurdly funny, going from “casual white supremacy” to how great George W. Bush must be feeling right now, while also connecting the dots with the same kind of realness Chappelle’s recent monologue had in the first place. It was a great first time hosting for one of the great comedians of the moment.

Editor’s note: This article was originally published on January 22, 2017.