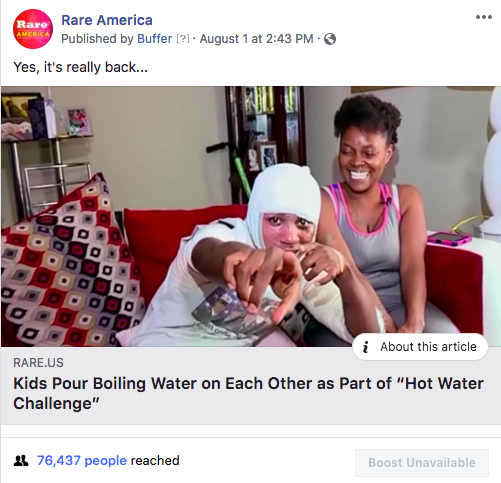 One more thing. It would only take one more thing to set George off. These damn kids today were, in his eyes, a total disgrace. He’d seen their lack of respect for anything first hand too many times, including just now at the grocery store. One boy, probably 16, had been on his phone filming another boy who was about the same age use a cucumber as a phallus, with which he was poking a picture Count Chocula on a cereal box in the mouth while saying to the camera, “Eat your vegetables you’re gonna get diabetes. I’m a vampire doctor.”

Children were going to eat that cereal. That face the boy defiled was going to sit on a breakfast table for a week at least, every morning, and stare at a child. But it wasn’t even just the youngest of the young who lacked decency. Upon seeing the boy thrusting into Count Chocula’s face George alerted a grocery store worker to the situation, assuming the worker would put a stop to it, make them pay for the cucumber, and call the boys’ parents. However, the worker, who was in his early 20s, simply laughed and shouted, “Oh damn y’all are wild!” Then he jumped into the camera’s frame, behind the thrusting boy with the cucumber twixt his legs, and began to do some sort of dance that involved moving one’s hips in one direction and one’s balled fists at the end of one’s straight, outstretched arms in the other. Both parts moving rapidly.

“Follow me on Insta! At BluntznHoez6969! Imma savage!” the grocery store worker shouted into the camera.

George later Googled the dance and found an explanation on a website run, apparently, by inner-city poors.

Well isn’t that just where all the trouble comes from, George thought.

According to this Urban Dictionary site George had found the dance was known as “flossing.”

Things just weren’t like they used to be in George’s day, when young people were polite, kind, and respectful of society’s rules. Except for the millions of hippies. Also bikers. And his friend Harry, who came home from Vietnam with a jar of teeth and ears that he refused to explain ever but would sometimes taunt, saying things like, “You didn’t think I heard you up in them trees?” and, “Laugh all you want I own you shut up!”

George got home from the grocery store and tried to calm himself down. He thought maybe he’d gotten too worked up. He got on his computer and scrolled through Facebook. He looked at pictures of his friends and family, including some of his little nieces and nephews, which made him begin to worry again. What would those sweet little faces be doing one day? Would they feel peer pressured into posting videos of themselves to Instagram, in which they took needles out of the oven and swallowed them, or fought feral, rabid street dogs? All for the cheap thrill of fame?

Then, George saw it. A news story about teens who were pouring boiling hot water on each other for laughs. He couldn’t let this stand any longer. He had to say something. Like his hero, Evil Knievel, he had to believe in himself.

So George said what needed to be said, and hoped he’d made a difference. He felt better, even. Then a week later he hit a kid doing the “In My Feelings Challenge” with his car.