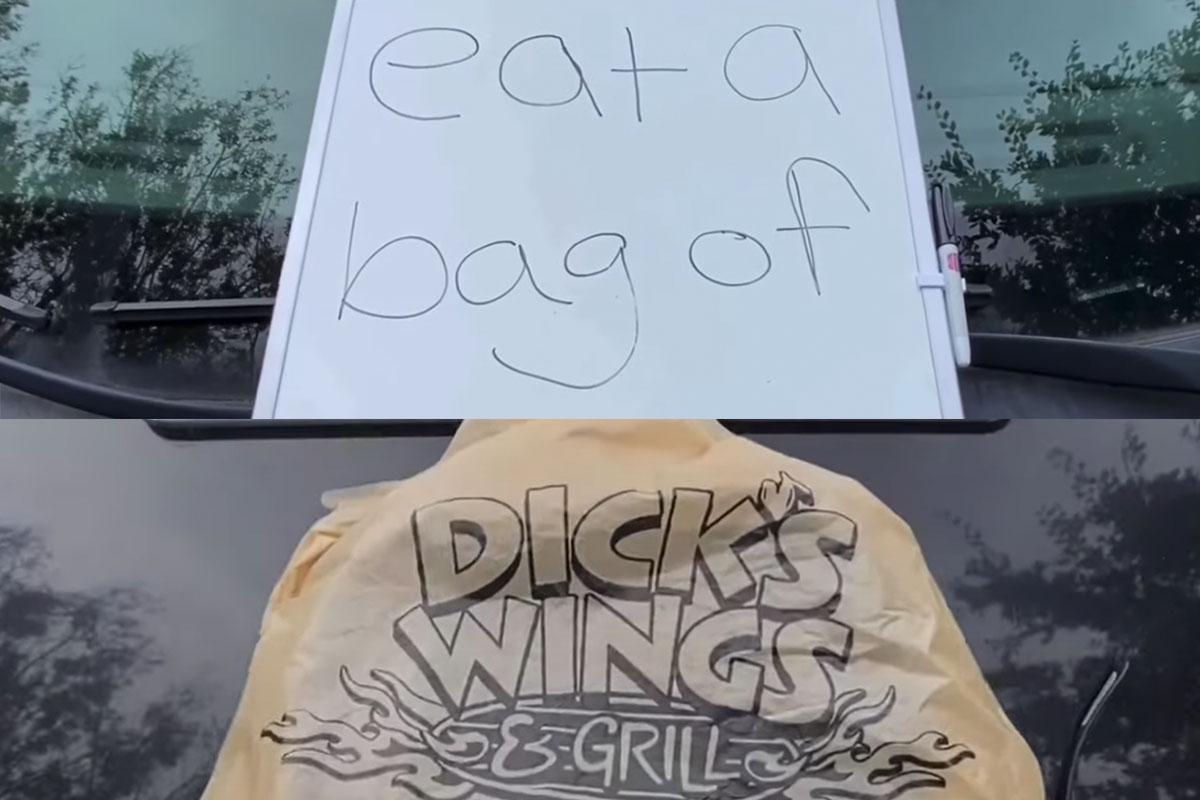 A Florida man and advertising genius had 9-1-1 called on him over and over again because a bunch of Karens couldn’t handle his brilliance.

The man advertising on the corner of Boulder Rock Drive and Palm Coast Parkway in Palm Coast, Florida was, in fact, not advocating that the locals eat a big bag of penises. Rather, he was advertising for Dick’s Wings & Grill, a chicken wing joint with locations across Florida, Georgia, and Texas.

The local busy body women were not amused by this at all. You’d like living in Florida would somewhat immunize your brain to stuff like this but apparently the sign was still over the line for a few people. Even those aware of the Dicks’ wings restaurants.

The chain, which claims it has a unique restaurant experience, is definitely proving it with this guerilla advertising campaign.

Seriously, half the town called the police over this sign. So many people called that cops started being like, “The guy with the sign? Yeah we know we know. It’s a First Amendment thing. Nothing we can do.”

If the people of Palm Coast, Florida are still feeling upset about the genius sign may I suggest cheering yourselves up with…. SOME DANK ASS GRUB FROM DICK’S WINGS & GRILL BABY!

Nothing is going to cheer you up like Dick’s loaded waffle fries. Or maybe something off their appetizer menu like fried pickles, hog wings, mozzarella stix with rich marinara sauce, or onion rings. Or maybe pick from one of their dope as hell quesadillas folded between warm, doughy flour tortillas. They’ve got chicken tenders for the kids, house salads and veggie and grilled chicken wraps for the health-conscious, plus flatbreads and burgers if you’re not feeling wings.

But let’s be real here, offended people of Palm Coast.You want some beer and some New York-Style Chicken Wings. Some yummy as hell fried chicken wings you can dip in bleu cheese or ranch dressing. Or whatever your favorite dressing is. Cajun ranch anyone? Or maybe you don’t want that bone. In that case, get yourself an order of Dick’s Blingz. It’s 2020. We’ve got love for the boneless chicken wings too.

Their menu items all look glorious. There’s really no way to go wrong. Make it a big ass combo.

So take our choice of dick, Palm Coast, Florida. Being one, or eating some… Dick’s Buffalo Chicken wings.