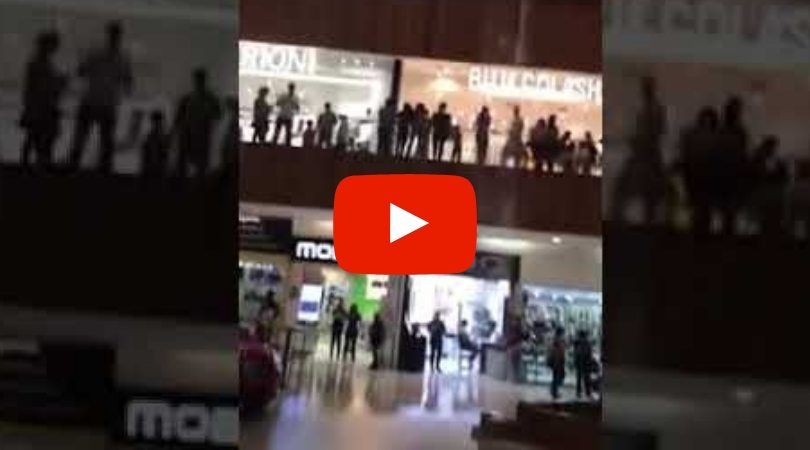 What do you do when you’re at the mall walking around, and water starts falling from the roof, quickly sinking with no way out? You act fast and bust out your best Celine Dion impression, and play “My Heart Will Go On.” Duh! I mean, that’s exactly what this band did, and I think it’s genius. Think of it as a way to keep the customers distracted from all the water falling on their heads.

As heavy rain caused a mall in Mexico to flood, the band playing inside didn?t miss a beat and decided to switch up their performance to resemble the Titanic. The rain was quickly falling from the roof onto buckets, caused by the heavy rains trapping people on the second floor. But no worries neither the band nor the customers went down with the ship this time. Because well, nobody could go downstairs and the band was high off the ground, on the stage.

A Little Bit of Humor to Save the Day!

The video shows the Plaza Patria Mall in Zapopan Jalisco as a cascade comes in from the ceiling, and the band giving their best rendition of the song. Apparently, this isn’t the first time the mall floods, which is kind of worrisome. Last year during Guadalajara’s rainy season it also caused problems, but there was no entertainment back then, which is a bit disappointing.

Honestly, Celine Dion couldn’t have done it better herself if you ask me. I’d give them some tips if I was there. I’m really surprised the band knew this song, in the first place. Do you think they get together during rehearsals and practice songs that they can play during natural disasters?

Celine Dion: “My Heart Will Go On”

Or maybe the 1997 song is just that good, that they knew it by heart. If so, that’s impressive. I wonder how many times they played it. Hey Plaza Patria, you might want to get your roof checked.

Editors Note: This article was originally published on June 11, 2019.