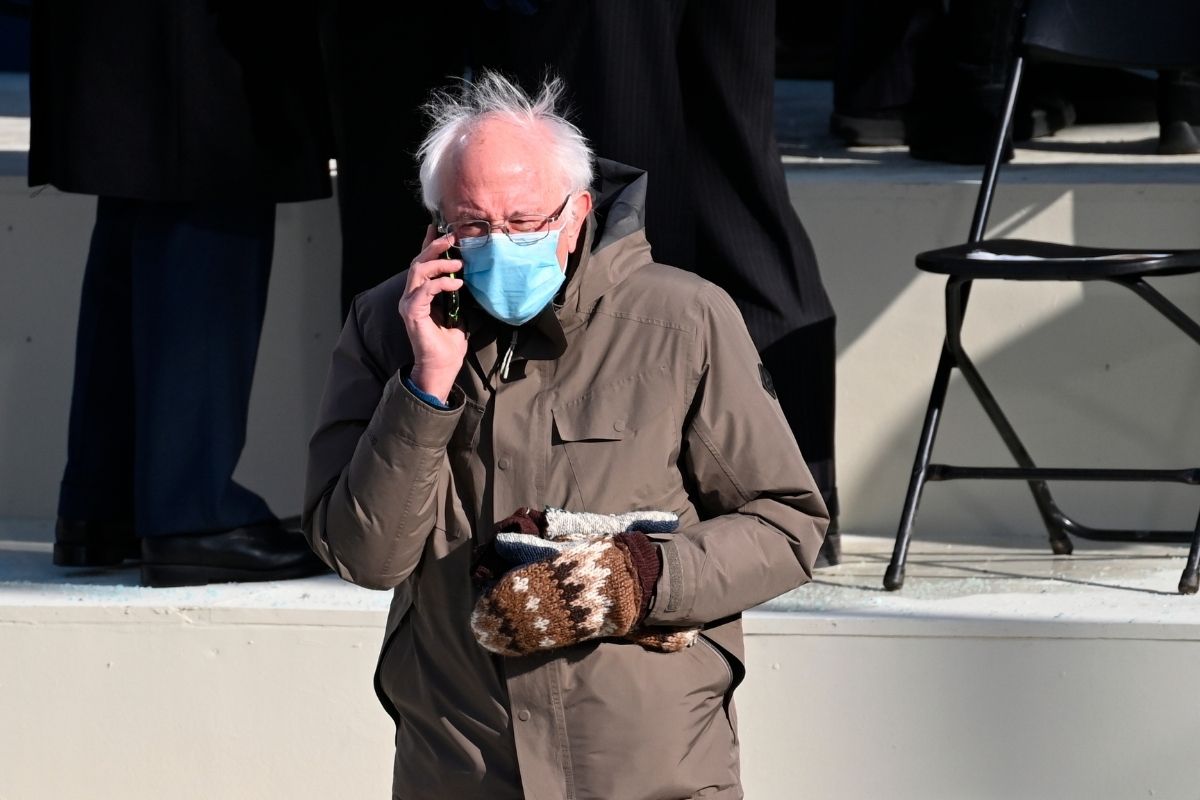 Senator Bernie Sanders showed up to Joe Biden’s inauguration looking like he had somewhere else to be. Walking around with a large manila envelope tucked under his arm, the senator appeared distracted ? as if the presidential inauguration was just another chore on a busy day. Maybe it was! Donning a blue surgical mask, casual puffer coat, and oversized knit mittens, Bernie was clearly not going out of his way to dress up in the Washington, D.C. winter cold. But at least his hands were cozy. The authentically unadorned getup, so true to character on this no-nonsense democratic socialist, has inspired an all-out meme craze on social media.

Bernie and his fold-up chair are popping up on the New York subway, in shoveled parking spaces, on the bench with Forrest Gump, even at the butcher shop from The Sopranos... It’s a versatile pose that Sanders struck on the makeshift seating accommodation. With a (somewhat) grumpy expression concealed by the ubiquitous blue face mask, his particular slouch was something everyone could relate to ? especially coming out of 2020. The former presidential frontrunner’s position on Inauguration Day carries, so effortlessly, into various moments of modern urban fatigue. The onslaught of memes now ranges from hilariously mainstream to local and niche. Read on to see some of our favorites and learn a bit about the story behind Sanders’ now-iconic brown mittens.

Wait, is Bernie is wearing the same jacket from his meme at the inauguration? pic.twitter.com/q0DtVNpZbB

It’s safe to say that Bernie Sanders was not trying to upstage the stylish Michelle Obama, Vice President Kamala Harris, or the new First Lady Jill Biden when he got dressed on the morning of January 20, 2021. From the looks of it, the chosen parka was actually the same one he wore in his old “I am once again asking for your financial support” commercial ? another heavily-memed event from Sanders’ bid for the presidency. Bernie, for all his non-fussiness, remains perfect, warm-hearted meme material. During an era when everything online is hotly contested and politics is deeply personal, Bernie Sanders’ platform ? and persona ? collectively represents an inoffensive cross-section of old-school values. At least to his young, tech-savvy fans. Even if the leader does not have very good fashion sense. But this time it was not Bernie’s favorite (and extremely practical) coat that caused a stir following President Joe Biden’s swearing-in ceremony. It was the giant mittens!

The mittens were gifted to Sen. Bernie Sanders by Jen Ellis, a schoolteacher from Essex Junction, Vermont. Ellis, a staunch Sanders supporter, wanted to offer the inspiring senator a handmade token in response to his primary loss in 2016. Aside from her day job, Ellis makes and sells her mittens on Etsy, knitting each pair from repurposed wool sweaters and fleeced recycled from plastic bottles. It’s no surprise that the environmentally-conscious second-grade teacher felt so deeply connected to the Vermont senator’s progressive mission. When Sanders chose to run again, in 2020, Ellis was delighted. She was even more delighted to see Sanders wearing her mittens all across the campaign trail! More shocking perhaps, was when Bernie Sander also wore the thoughtful gift to the generally formal presidential inauguration. Since the mittens made their viral appearance at the U.S. Capitol, Ellis’ online business is naturally trending but she’s announced on Twitter that there are no more mittens left to sell!

Bernie and Paulie at the Butcher Shop

I literally snorted when I saw this. This is my favorite now! I cannot stop giggling 🤭 🤷🏽‍♀️#BernieSanders #Inauguration2021 #Chicago pic.twitter.com/wyZ6WDCZBK

Posted by Guy Fieri Himself!

Bernie as the other woman

And Finally, a Relatable Pandemic Gripe