The newest craze sweeping the internet is a fashion magazine from overseas, and we have a lot of questions about it. But mostly, we want to know, where can we get one?

HERE IT IS! My favourite magazine cover of the year – the @thatslifeuk Christmas bumper issue. “Mistletoe & SWINE” is an instant classic coverline. Will definitely be buying a copy of this today. pic.twitter.com/YWQmXJNp8s

The magazine, That’s Life,” is a British tabloid aimed at a young female audience. On their website, they boast, “It’s safe to say that’s life! is where you’ll find the stories that no other magazine dares to tell.” But, the internet isn’t shocked by the stories inside, they’re judging a book by its cover, and the cover for the Christmas issue of That’s Life is downright spectacular and absurd.

Among the stories promised on the cover was a story entitled “Mistletoe and Swine” and claims “who he bedded was SHOCKING.” Pretty much everybody who saw the magazine agreed that it seems like a perfect Christmas gift.

Tag yourself, I’m tot (3) who hated his gifts so much he burnt the house down.

Rather than the celebrity tabloids that focus on stars and the red carpet, That’s Life focuses on their readers by publishing absurd stories that people tell them. It’s an interesting business model, to say the least.

RELATED: The bully dweeb from the classic “A Christmas Story” sure doesn’t look like this anymore

Perhaps most eye-catching is the cover story teased simply as “I said I wanted UGGS!” The art for the story features a troop of pugs dressed in Santa costumes and looking very confused by the situation that they’ve found themselves in. 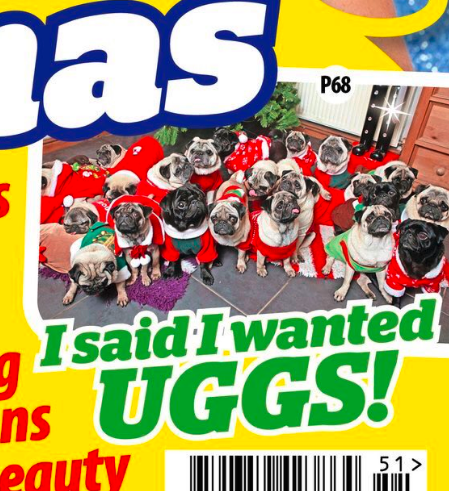 At this point, we think it’s probably a good idea to just get our hands on one of these and figure out what in the heck is going on inside.