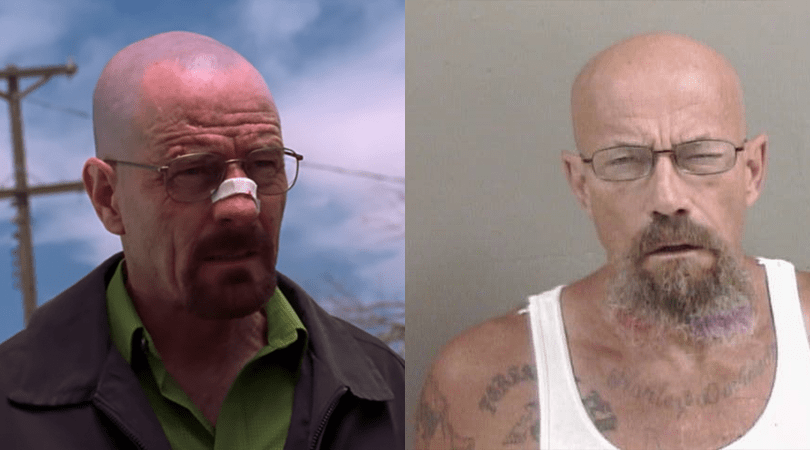 They say life imitates art but really it’s more likely that Breaking Bad creator Vince Gilligan just Googled “meth mugshots” and then wrote his description of what main character and meth kingpin Walter White looked like based on a rough composite of about ten or so of those. (Writing, like most things in life in 2019, is aided heavily by just Googling whatever the hell it is you need to know.)

As you can see from 50-year-old Illinois man Todd W. Barrick Jr.’s mugshot that’s probably exactly what Gilligan did, because Barrick is something of a ringer for one of TV’s most iconic and terrifying characters. Barrick is currently on the run and wanted by the Galesburg Police Department for a probation violation related to the possession of meth.

Galesburg Police posted Barrick’s mugshot to Facebook hoping the community might have information on the fugitive’s whereabouts, however commenters immediately keyed on the resemblance between Barrick and Breaking Bad actor Bryan Cranston, who played Walter White.

As of Tuesday Barrick is still at large. Let’s just hope he’s not also the danger. The one who knocks.

For those unaware, the Walter White character in Breaking Bad became a meth dealer after getting a cancer diagnosis and needing money to pay for it (so that he wouldn’t, you know, die). White wasn’t much of a threatening man when the series began. He was a mild-mannered — cowardly, even — chemistry teacher. He was also an extraordinarily talented chemist who was able to create the best meth anyone had ever had. The meth was so good that his business grew bigger and bigger until he was so deep into the underworld that he inevitably… wait for it… broke bad. (I promise that’s a spoiler free synopsis.)