Presenting awards isn’t as easy at it looks, especially for British reality TV star Gemma Collins, who was recently presenting an award at the BBC Radio 1 Teen Awards when she got a bit too excited and fell of the stage.

Everything was going so well. Collins was clearly honored to be presenting such a prestigious award, but she just couldn’t control her excitement. She yells out the winners and then starts twirling around while letting the roars of the audience wash over her — but she twirled in the wrong direction and lost a battle with gravity, with Ariana Grande’s “Into You” playing over the chaos.

RELATED: First female “Doctor Who” is getting a slew of companions — and we can’t wait

Luckily, Collins escaped unharmed. Like some sort of award-presenting machine, she got straight back on her feet, quickly regained some of her composure and yelled into the microphone “Oh my God, I am so sorry … this is live, this is what happens.”

Some Twitter users had an absolute field day with footage of the fall, and it didn’t take long for the gifs and mash-up video to appear.

Can't believe I got to witness the most iconic moment in teen awards history. Gemma Collins everybody. pic.twitter.com/VK4H1UySKs

She may not have been graceful on the stage, but in the aftermath, Collins saw the funny side and took the whole ordeal in her clumsy stride with a hilarious Instagram post and a few tweets.

Madonna done it and I done it ✌🏻 when I tell you I’m Bridget Jones in an Essex girl it’s finally confirmed ✌🏻best and worse moment for me ✌🏻 pic.twitter.com/TpJXJxmYL5 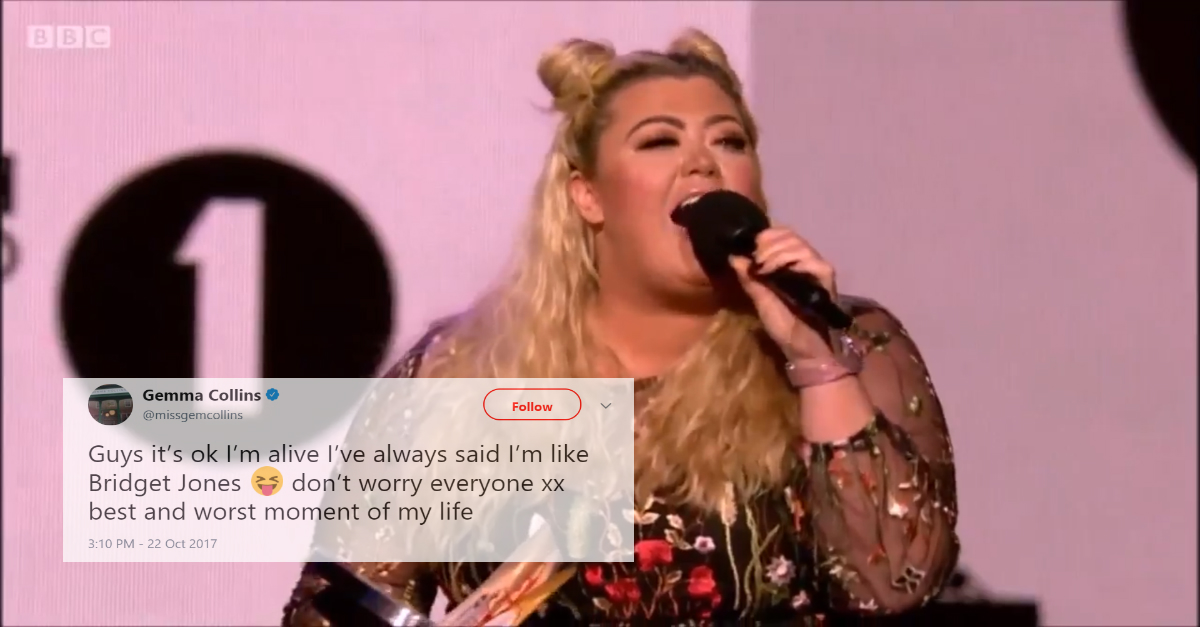