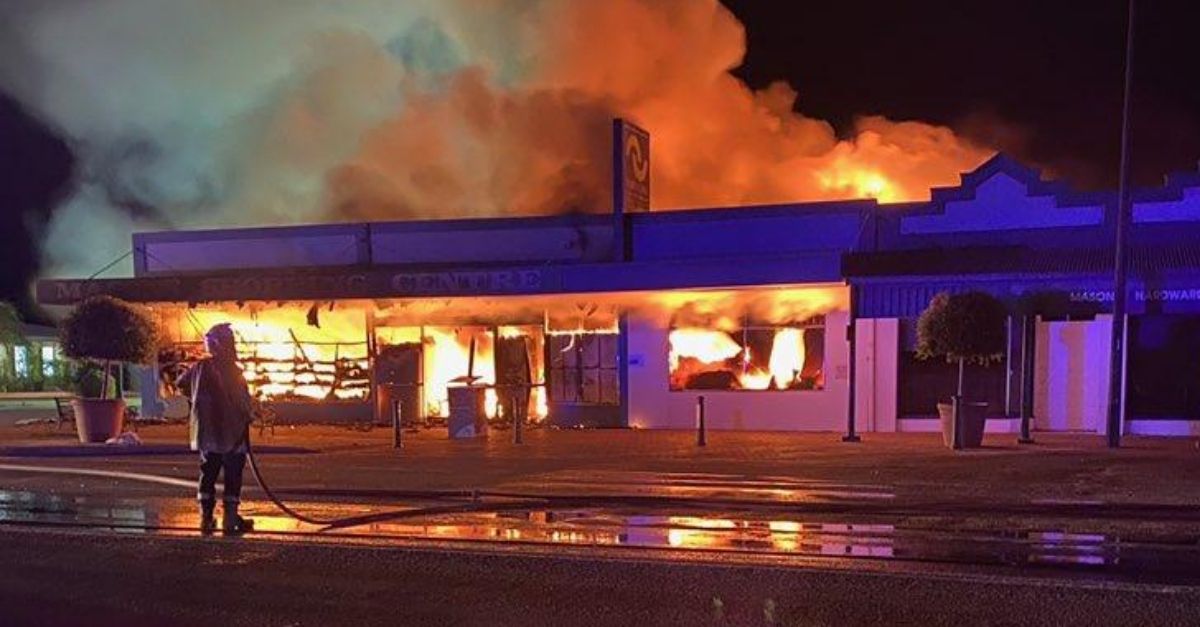 An Australian grocery store owner who was extremely paranoid about the coronavirus and became so obsessed with germs decided that the best way to get rid of them was to burn the whole grocery store down. Yes, he set his own shop on fire to basically kill all the damn germs. Was this man high or insanely drunk? I don’t know, probably both. Because this is just pure, plain, dumb.

According to authorities, 57-year-old Edward Guy Mason, who co-owns the business in the town of Bruce Rock, lit three cardboard-filled shopping carts ablaze during a failed suicide attempt. The Australian Broadcasting Corporation stated that Mason eventually fled the inferno before he was ultimately arrested and confessed that he believed he was positive for COVID-19. So, all he was doing was “protecting shoppers” from the virus itself.

Bruce Rock Police would like to speak with anybody who captured mobile phone / video footage of the fire at Masons Supermarket last Wednesday (25/03/2020). Your assistance would be appreciated. Give us a call on 90611035 or Northam Detectives on 96224260. Thanks everyone! #fb pic.twitter.com/K33Dx4rmWA

When asked about the situation, Edward Mason stated, “Seeing different news reports and seeing how it could be transmitted and I thought, ‘We’re getting boxes coming out of the warehouses, boxes coming from China… I felt surely there could be germs on these cartons.” How much was the stunt? Well, it cost the man roughly $700,000 in damage. Yup, like I as, so dumb.

As expected, Mason pleaded guilty to a charge of unlawfully damaging a building by fire and faced a judge at a sentencing hearing. Judge John Prior heard that Mason was highly riddled with anxiety at the time he set the said blaze and that his mind had been playing tricks on him. His lawyer, Richard Lawson stated, “he decided he had to eradicate himself” and felt pressure to keep the shelves stocked.

AHHAHHAH HONESTLY, AHAHA. I don’t know what to tell you at this point. Lol. https://t.co/efzF4qHa2J

Prior sentenced the man to a 16-month jail term but quickly suspended it, nothing that Mason had no past criminal record, and had received 17 character reference. So, at the end of the day, this man was ordered to just pay his co-owner for half of the damages. Because well, I’m sure the other owner was angry as ever. Mason spoke with reporters about his high-stress levels, saying he had become overrun with customers.

He noted, “I was running a business and just seeing my shelves stripped bare. It was very hard to deal with. People were driving 30 minutes from another town and they’d just come in and strip my shelves bare if their town was empty. That’s where all the conflict began, because my customers couldn’t understand why they couldn’t get their regular items.”

Yup, I guess the way to keep customers who don’t want to follow the safety guidelines by wearing face masks is by burning everything down. Totally. The best bet, hands down.