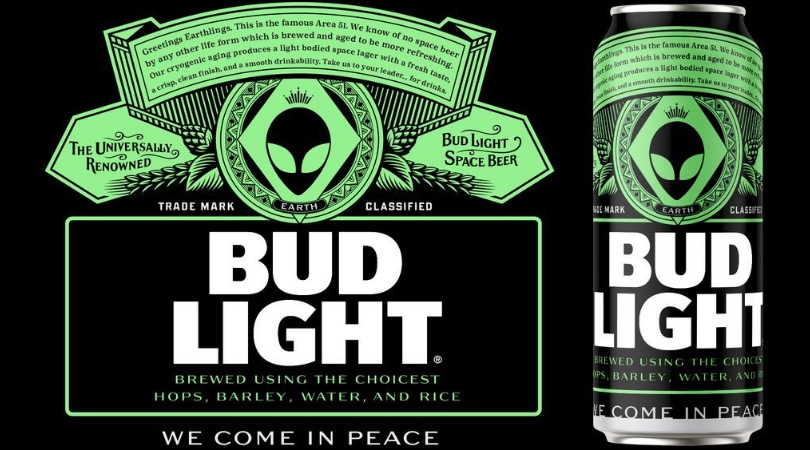 It looks like Bud Light has decided to join the crazy and ridiculous September 21st event. In case you have been hiding under a rock, more than 1 million people have pledged to storm into Area 51 in search of aliens. I know, I told you, it’s ridiculous. It all started through a facebook event which has recently gained a lot of followers and supporters, desperately trying to find out if aliens actually exist or not. Surprisingly enough, people are supporting this whole event and think it’s a great idea. Which isn’t, but hey, they’ll learn soon enough, right? The U.S. air force will make sure of that.

So, to stir the pot a little bit, Anheuser-Busch, Bud Light’s parent company, teased on Twitter that it will give free beer to any alien that is released during the Area 51 raid. Not only that, but the company has even created a green special edition beer can. Because we all know that beer fans always go for that new fresh design. Plus, if I’m being honest, it kind of looks pretty cool.

The beer company had initially tweeted that they were not supporting those who planned to raid the super top-secret alien center tourist attraction. However, one day later, that quickly changed, as they tweeted, “Screw it. Free Bud Light to any alien that makes it out.” The company also tweeted out the picture of the black and neon green beer can, calling it the “Area 51 special edition.”

The greeting across the top of the can hilariously reads, “Greetings Earthlings. This is the famous Area 51. We know of no space beer by any other life form which is brewed and aged to be more refreshing. Our cryogenic aging produces a light-bodied space lager with a fresh taste, a crisp, clean finish, and a smooth drinkability. Take us to your leader…for drinks.” In the bottom, the beer included the phrase, “We come in peace.”

But that’s not all! Several social media users were skeptical thinking it was only a meme, so they and asked the company if it was real. How did they respond? “51,000 RTs and we’ll make it happen.”

Boy oh, boy. If this is true and they get those 51,000 retweets, I really hope they release this beer and actually make it green. Who doesn’t like a good special-edition beer? UFO’s will certainly come out if they hear they get free beer cans right? You better keep your promises, Bud Light.

Watch: The 6 Best Beer Towns in the U.S.