Chow Crown is Basically Musical Chairs with Food, and We Love it 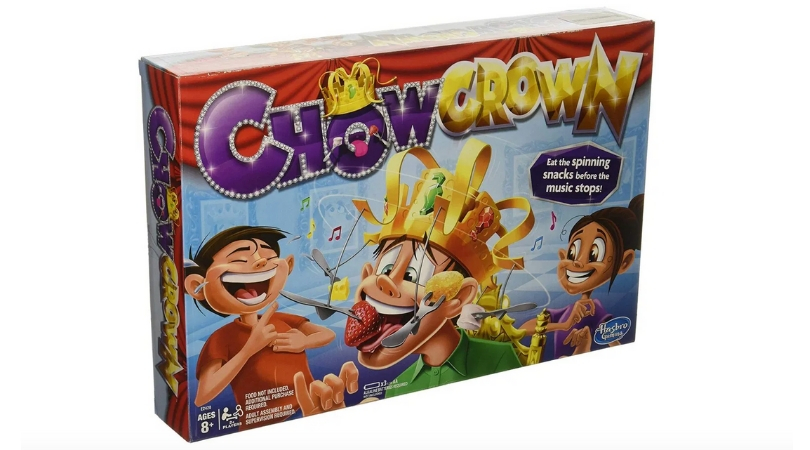 Imagine your sibling pulling out a board game trying to get everyone excited about playing Monopoly for hours. That game goes on forever. I’m seriously thinking about my mortality at the young age of 20-something after playing that game for more than 28 minutes. I need a fun party game that really speaks to my soul. I need something fast-paced and competitive, and I found just that. As I was searching for a new fun family game, I came across Chow Crown.

I finally get to put my fast eating to the test. If you know me, you know that I could definitely out eat the entire cast of some popular weight loss show. Throw a skittle at my face and I’m catching it in my mouth, no doubt. That’s basically the gist of Chow Crown, but you’re catching food in your mouth while a crown of various foods are spinning on your head.

Does this not sound like the most fun game ever? There are too many kiddos in my family, so Cards of Humanity isn’t something for the entire family. Chow Crown is perfect for get-togethers and family game night after holiday dinners. You should check out this video of a father and son playing together, it may make the rules make more sense.

Now that you have visuals to get a feel for the game, here are the rules from Hasbro gaming. Load up the fork arms and play music. Once the music starts, the snacks will begin spinning. Eat as much spinning food as possible before the music stops. And no, you cannot use your hands! Whoever eats the most food wins.

You can choose between two modes of play. There’s short game mode, where you eat the most food before the music stops or long game mode.

Chow crown! This game was so fun and ridiculous. I hate losing at anything so it was super frustrating not figuring out how to get all the foods😆 but it's a great laugh for everyone! Enjoy my failures 😅😅 #chowcrown #gamenight #family #ducks #oregonducks #thatvestdoe #everydayisarmday #aesthetic #fit #fitness #likesforlikes #beast #manbun #followme #insta #instagram #smile #havefun #nike #laugh #love @bodybuildingcom @nike @stfuat @manbunmonday @niketraining

Get creative with your snacks. Will marshmallows be tough to bite off? Will you make things tricky with cheese? The Chow Crown game is going to be a hit at my house. You can get this chow-chompin’ game on Amazon or Walmart. This new game has hilarious customer reviews. The musical crown-spinning game has gotten families laughing until they’re crying.

Order your AA batteries, game, and your favorite snacks for the crown arms. Now, who’s going to be the chow champ in your family?