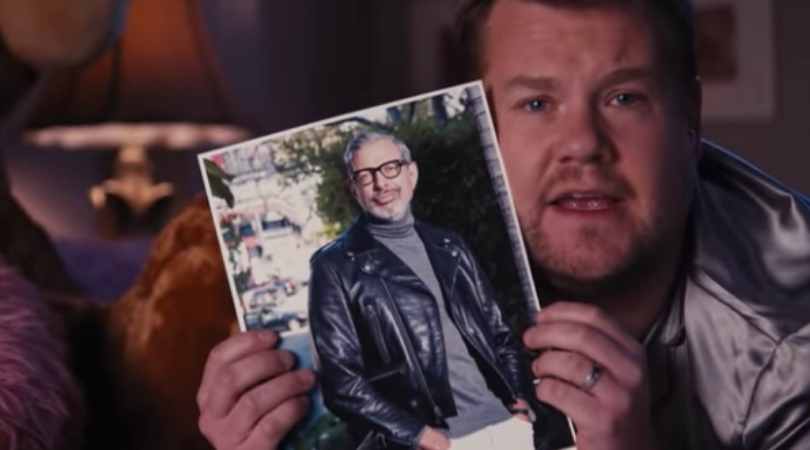 In case you haven?t been keeping up with the latest trends in regards to music, the talented and beautiful Ariana Grande has been making her way up the Billboard charts for a few weeks now. The singer released her song, ?Thank U, Next? which broke many records worldwide, including the most plays in a single day by a female artist on Spotify and reached number one in over 13 Countries, meaning, it?s pretty much a world favorite.

Which is why The Late Late Show host, James Corden, decided to embrace the success of the song and give it a little twist. The host created a parody, with a unique take on the movie spoofing video that broke another record on Youtube by Grande. Unlike Grande (click here for her original video), Cordon decided to target one man, and one man only: Jeff Goldblum. I mean, honestly, who wouldn?t? Have you seen him!

The parody opens up with Corden thanking Goldblum for going on the show, repeating the words ?thank you? over and over. The 66-year-old actor quickly responds thank you back, and suddenly becomes confused saying, ?What?s that music??, as strains of Grande?s song comes up from above. The scene quickly changes and takes us to a shot of Cordon in a room, lying on his stomach in silk pajamas.

Like in Grande?s video, he shows us his ?Burn Book? (a reference to Mean Girls the movie) packed with images of the actor from throughout his career. Everytime Corden turns the page, we are shown pictures from each ?Goldblum Era? as he mentions each movie, singing about his successful career and what he felt while watching him. Corden sings,

?First saw him in ?The Fly,? where his face was grotesque. Then he won independence from an alien mess, ?In ?Thor: Ragnarok,? his performance was classic. But who could forget the hot doctor that he played in ?Jurassic???

Of course, let?s not forget the amazing dance routine in the middle of the stage by dancers who are dressed up as Goldblum’s characters. Because let?s face it, it?s not a parody unless you?re not mocking someone’s career. Honestly, this is pretty funny, I grinned the whole time watching it, because like I mentioned, who doesn’t love Jeff Goldblum! I love the fact that Goldblum just goes along with it and looks like he’s enjoying it. Ah, Jeff, you’re wonderful. We?re all on the same boat as you, Corden, even if we don’t admit it!

This article was originally published on December 6, 2018.