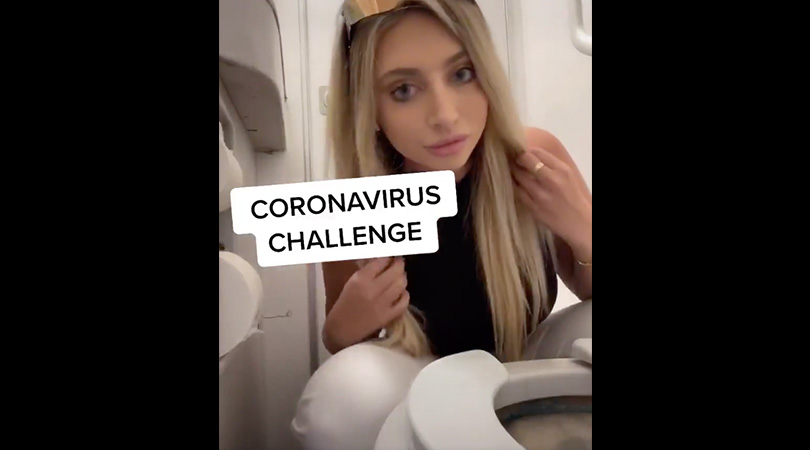 Social media influencers are probably the best evidence that exists to support the idea that humans deserve extinction so, naturally, one of the most obnoxious influencers you could imagine just gave a metaphorical and performative middle finger to God in the midst of the most frightening pandemic since the Spanish Flu.

Sentient attention black hole Ava Louise, who has 19,000 followers on TikTok and 165,000 followers on Instagram, posted an unfortunately successful attempt (that I am, admittedly, aiding with this post) at getting attention to her Twitter that featured her opening the toilet hole on her face and then licking an airplane toilet seat to prove how little she cared about the Coronavirus.

Please RT this so people can know how to properly be sanitary on the airplane 🥰😅 pic.twitter.com/x7GX9b4Lxc

When asked why she licked the airplane toilet seat, Louise gave Business Insider a couple of serious gems.

She was ?tired of some b?- named corona getting more publicity than ME.”

?It was iconic,? she added. ?ALS bucket challenge could never ? Period.?

She added that ?hot blondes? can recover from anything so there?s ?no harm done.?

1. This falls under the category of “so insane it might be fake.” The actual act of licking the toilet aside (which was definitely real), what she said about it afterward is a huge red flag. Most people as savvy as she is in terms of getting attention probably aren’t also that dumb. Maybe? Possibly.

But be careful, Ava Louise. We are what we pretend to be. Eventually, you become the character you play and your entire life becomes a bit. So when your “bit” is licking what people’s legs sweat on as they push out some foul airport Chilis meal, you definitely might want to avoid letting that become who you are.

2. But also, even if the quotes are fake, this dumbass still licked a toilet seat and told a huge audience that Coronavirus is nbd, so she’s really already become her bit, if she was ever anything else in the first place.

This story was originally published March 17, 2020

Watch: Person Films Themselves Licking Airplane Toilet Because This is What Social Media Demands