Man Kicked Out of Costco for Refusing to Wear Mask Tries to Get Revenge on Worker, Fails 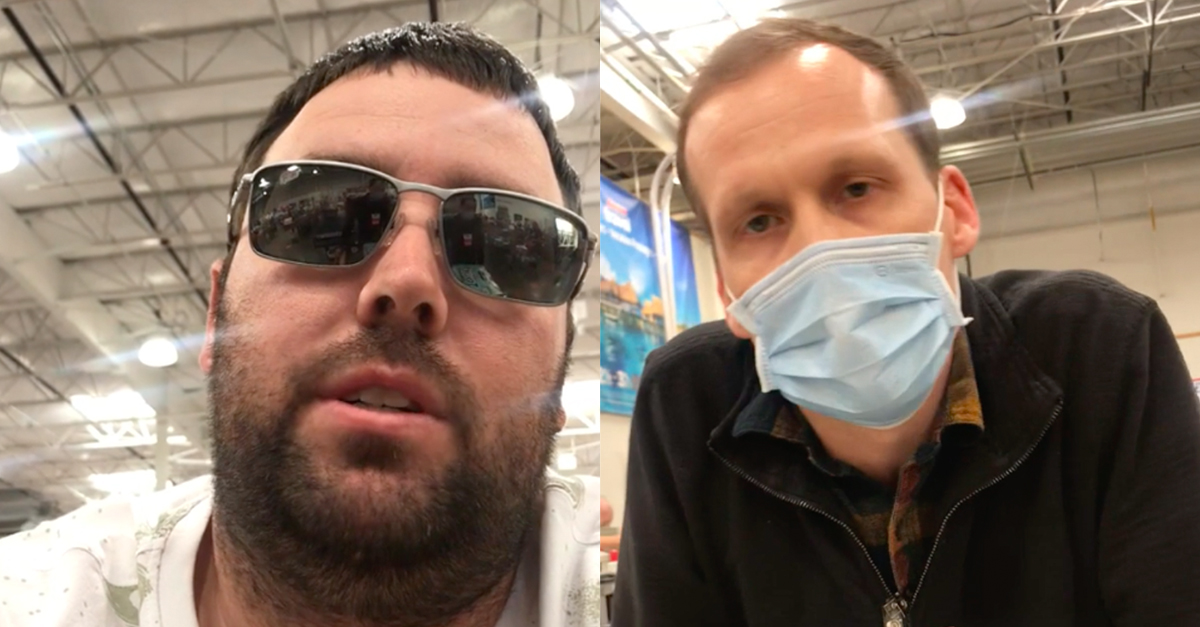 A Colorado man attempting to prove that he was a real, liberty-loving, free-thinkin’ ‘Merican by not respecting the completely legal rules governing a business’s private property had his plans backfire on him in fairly spectacular fashion. Fortunately for us, it was all captured on video. By him. (Hence the backfiring.)

The aforementioned man who has somehow deluded himself into thinking he’s some sort of 21st Century Boston Tea Partier because he won’t cover his face during a very real pandemic walked into a Costco in Arvada, Colorado without a facemask on. Costco store policy says its members and employees must wear facemasks to shop there while the Coronavirus is out and about being a real dick to everyone.

The man was not down to follow the rules this private business is well within its rights to enact on its own property, though. Again, this guy basically Samuel Adams and Paul Revere and Patrick Henry plus a dash of Patrick Swayze from Road House — minus doing anything of actual importance or a righteous cause — so he wasn’t about to lay down and be oppressed.

When a Costco worker named Tison told the man he needed to cover his face or leave, the man whipped out his phone and vowed to broadcast this rape of his God-given rights as an American to his 3,000 Instagram followers.

The Coscto employee, however, happily introduced himself to the camera and explained why he was confronting the customer. He then confiscated the man’s shopping cart and kicked him out of the store. So the upset patriot/customer uploaded the video to the internet, thinking it would vindicate him.

It very much did not.

Here’s the video, which has since gone viral. Not because people agree with the man who wouldn’t wear a mask, but because people think he’s an idiot and that the Costco employee is awesome.

Here are some choice quotes from the man in the video.

“I’m not doing it because I woke up in a free country.”

“Cuz I’m not a fucking sheep.”

After going viral the man took to the internet to explain his actions… and by that I mean take no responsibility for himself and his choices, call everyone else a sheep, and blame liberals for… stuff. (That last part being especially ironic since it is conservatives, typically, who tend to be the ones who have more reverence for right businesses have to set reasonable rules in order for customers to patronize their property and services.) He was also shirtless and in bed, for some reason.

All’s well that ends well and there are few better endings than an attempted internet shaming backfiring.