Remember When the Dave Matthews Band Dumped 800 LB of Poop onto a Chicago River Tour Boat? 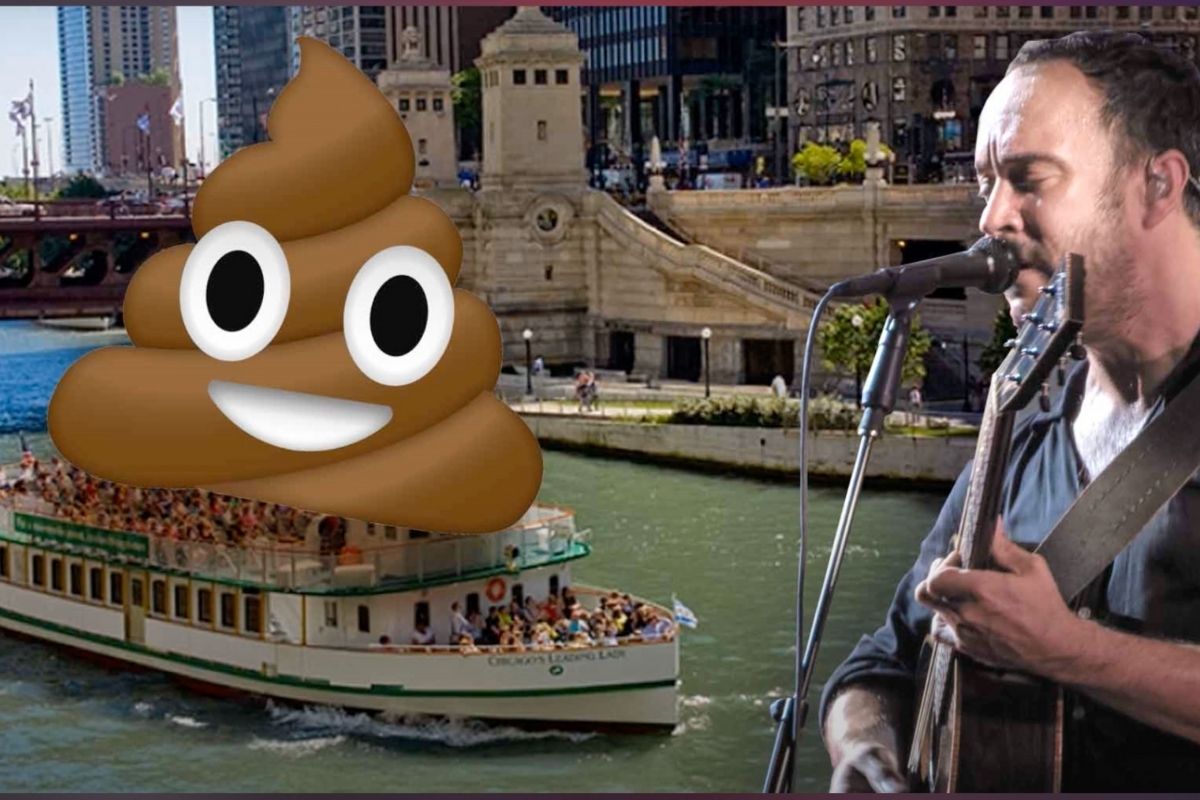 The 2004 Dave Matthews Band Chicago River incident was a big deal. The disgusting scandal has even earned its own Wikipedia page! So let’s take a moment to remember the events of August 8th, 2004, when the tour bus for a beloved alt-rock jam band dropped nearly a half-ton of human waste onto an unsuspecting Chicago River cruise.

The circumstances which led to the Dave Matthews “Poopgate” disaster were two-fold. First, there were two nights of shows planned for the Dave Matthews Band show in East Troy, Wisconsin. The town is an hour-and-a-half from the Chicago city limits, so the band chose to stay in the Windy City, booking rooms at the historic Peninsula Hotel. It was presumably on the way to this second Wisconsin concert that tour bus driver Stefan Wohl released a full septic tank on the Kinzie Street Bridge over the North Branch of the Chicago River. 800 pounds of human waste shot down onto Chicago’s Little Lady, a passenger boat that was sailing down the Chicago River on an architectural tour.

According to reports from The Chicago Tribune, those aboard Chicago’s Little Lady described “a downpour of foul-smelling, brownish-yellow slurry that ruined their clothes and made several of them sick.” No serious injuries were reported although some victims were taken to a nearby hospital.

To understand the gravity of Stefan Wohl’s mistake, it’s also important to consider the culture of the Chicago River within the city of Chicago. Especially during the summer months. The Chicago Architecture Foundation offers popular boat tours along the river which teach sightseers about the history of our special skyline. These boats have open-roof seating. Additionally, the bridges that cross over the Chicago River throughout the downtown area are affixed with a riveted grate surface that keeps the river visible to passersby on land. (There are mechanical reasons for the riveted grates, which bypass the need for drainage systems by allowing rain and liquid to pass right through.) The holes of the riveted gate intensified the amount of waste that rained on traumatized passengers of Chicago’s Little Lady.

Although the Chicago River once suffered from intense water pollution — it was essentially a sewage cesspool for hundreds of years — modern efforts by foundations like Friends of the Chicago River and other city-wide initiatives have vastly improved water quality. Not only has the (often rotten) stench alleviated but some estimates predict the river could be swimmable by 2030! Of course, dark memories of Dave Matthews Band tour bus will continue haunting some Chicagoans for years to come…

Multiple busses were part of the 2004 Dave Matthews road tour, so it took some serious investigation to determine who exactly was responsible for the deluge at the Kinzie Street Bridge. A publicist for the Dave Matthews Band insisted that every one of its buses had been parked at the time of the incident. But state prosecutors utilized the security tapes from a nearby fitness gym to correctly identify the true culprit bus driver: Stefan Wohl. Illinois Attorney General Lisa Madigan filed a $70,000 lawsuit against Wohl, who continued to deny the dumping along with the full support of the band. Dave Matthews Band violinist Boyd Tinsley had been aboard Wohl’s bus at the time, implicating the musicians in a larger cover-up.

In March 2005, Stefan Wohl plead guilty to reckless conduct and discharging pollutant contaminants. He was sentenced to 18 months of probation, 150 hours of community service, and issued a fine of $10,000 paid to the environmental non-profit Friends of the Chicago River. The Dave Matthews Band donated an additional $50,000 to the cause, as well as $50,000 to the Chicago Park District. They settled with the State of Illinois for $200,000. As for the city where this offense took place, the Dave Matthews Band dumping has become something of a badge of honor. Leave it to Chicagoans to turn something objectively gross into the ultimate bragging right.

WATCH: Dumb Thieves Try To Siphon Gas From Bus, But End Up Siphoning Sewage Instead