Did Elephants Break Into Village and Get Drunk on Corn Wine? 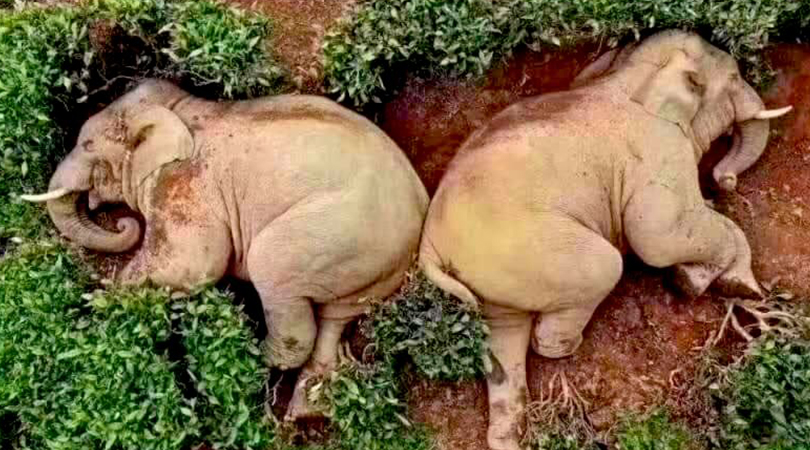 Editors Note: This post was updated on March 23, 2020, after the National Geographic announced the photo stating Elephants broke into a Chinese village and got drunk on wine was a hoax.

The National Geographic has officially announced that unfortunately, there have been no Elephants found drunk. The story, which was too good to be true, is, in fact, a hoax. Initially, Twitter was going around saying a group of elephants had rummaged through a village in Yunnan, China, and got drunk off corn wine, passing out in a tea garden. It quickly went viral on social media and Tik Tok, but we now know it wasn’t true. But, it was so good, that even we fell for it!

Apparently, no one has figured out where the drunken elephant photo first came to life, but a Chinese news report did debunk the viral post. They stated, “While elephants did recently come through a village in Yunnan Province, China, their presence isn’t out of the norm, they aren’t the elephants in the viral photos, and they didn’t get drunk and pass out in a tea field.”

Well, I guess this just goes to show us how quickly “too-good-to-be-true” rumors can spark in a terrifying time of crisis. Check your sources, people!

Pollution has gone down. The canals in Venice are clearing up. Elephants are getting wasted. Human beings may be locked down but the rest of planet Earth is having a good time, it would seem.

Such is the case with the aforementioned herd of hammered drunk elephants, who went buck wild in a town in the Yunan province of China while all the townsfolk were locked up indoors to avoid catching a hot sneeze full of Coronavirus.

When they were all sober. In tribal belts people hide country made alcohol but somehow elephants find it. They mark the houses also where they found that last time. If they see drunk people they get irritated also, since it was not shared with them. All credits in pics. 11/3/20 pic.twitter.com/ESYtPsrd68

It turns out this was not just a happy accident for the elephants. As conservationist Parveen Kaswan notes in his tweets, elephants love booze. They love it so much that they actively seek it out. And mark houses where they previously found booze. Elephants may, in fact, have a problem.

They even get angry when they see drunk people because that means there was booze to be had and it wasn’t shared with them.

No one teach elephants about cocaine, you guys.

1. I can’t decide if your town being overrun by drunk elephants would be terrifying or hilarious. Probably a little of column A and a little bit of column B. If you’re lucky they just drunkenly sing their elephant songs, stumble around a bit, and then pass out.

The next time your town is beset by blackout drunk elephants just order a bunch of pizza and chalupas and place them just outside the village. The elephants will be gone in no time.

Watch: A Squirrel Got Into a Fermented Crabapples and Put on Quite The Show