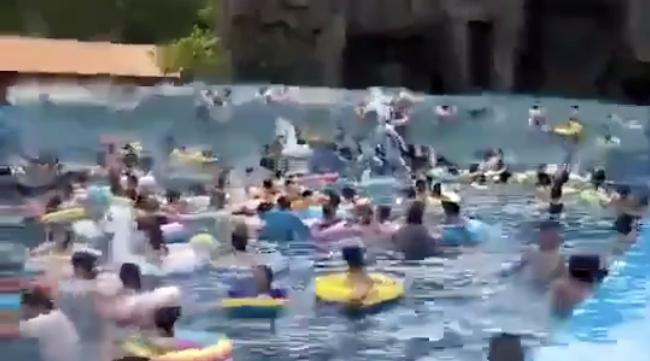 A Chinese water park worker got real drunk and took his turn for a shift at the wave pool. That turned out to be a disastrous idea for everyone involved, however, after the man decided to crank that wave pool up to 11 for… reasons. (Drunk.)

And these wave pools, apparently, are not made to mess around. When you turn the dial and rip it off, things happen. Waves. Big ass waves. Just look at this video. It shows a manmade tidal wave.

Water world Tsunami injuring many in Yanbian, Manchuria. The operator got drunk and turned the wave magnitude to maximum level. pic.twitter.com/PjKTBelPRA

Yeah, that’s a nightmare. How many people do you think crapped their swim trunks when they saw that thing come crashing into them? You’re at a waterpark, your stomach is full of rancid water park nachos and hot dogs (or whatever the equally, I’m sure, diarrhea-inducing Chinese equivalent is), and boom something terrifying races towards you and knocks the wind and everything else out of you.

Meanwhile the very rad drinking bro working the controls probably slammed his thirteenth Tsingtao, started sliding into every single DM he could on WeChat, and then laughed at all the loser kids trying not to drown like idiots. It wouldn’t surprise me if he tried to make a TikTok of it but dropped his phone in the water and then wandered off somewhere to take a piss in a plant, only to have twenty children he’d just tried to drown see his penis as they attempted to escape the park.

This article was originally published on July 31, 2019.

Watch: 10 of the Best Water Parks in the Country