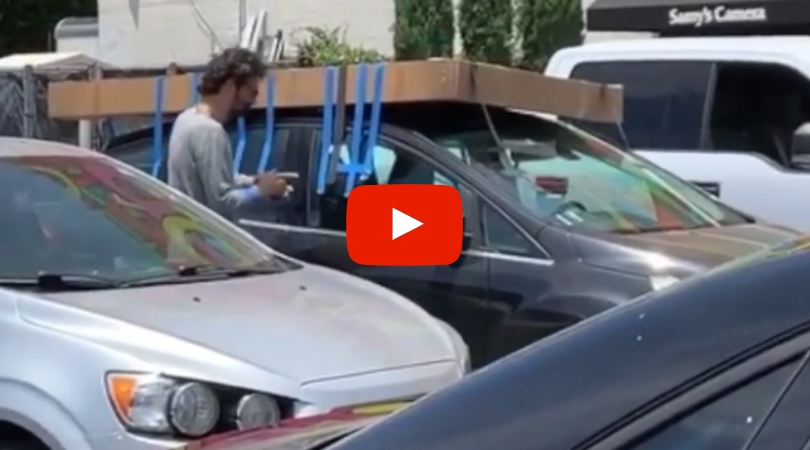 Hey Los Angeles, I know your traffic is terrible and it takes you hours to get from point A to point B. Driving sucks for you guys, I get that. But you know what sucks even more? When you are driving with something on the roof of your car. Why? Because now you don’t only have to worry about traffic, but you have to worry about the item falling on top of someone.

But this man, this man didn’t give one bit about the safety of others…or his item. You see, this dumb driver was caught on video physically using tape, yes blue painter’s tape (not duct tape), to secure a large box on the roof of his car in a parking lot. Yes, this man decided that his box, which sort of looks like a TV box, was going to be totally secured by just tapping it down to his car windows. He didn’t use a roof rack, tie-downs, ratchet straps, or whatever. He used tape.

Yeah, cool. I don’t see anything bad happening here at all, sir. Painter’s tape is definitely the new tie-down straps, I should use it next time I need to move my couch.

The guy is seen pulling out and the people recording follow him for a bit, shocked at his actions. Surprisingly enough, this is one lucky guy because the box somehow manages to stay on his car roof. But, can you imagine him actually getting on a highway with that thing? Yeah, this guy was probably just lazy and needed a quick solution, and pronto. Which we all know never work! He might as well have used his hand by sticking it out of the car and holding on to it.

Geez Louise, people really scares me sometimes. At least use some masking tape, my man. Everyone knows grey masking tape sticks like it’s nobody’s business. Also, how did he get inside his car if it was taped on all four doors? That’s the real question here! I hope all his friends saw this video and shame him for the rest of his life for this and never ask him to help them move.

Editor’s note: This article was originally published on August 1, 2019.