Keith and Kenny Lucas are surprisingly easy to interview. Or maybe it’s not that surprising. They’re twin brothers who happen to be a very successful comedy duo. They’ve no doubt done countless interviews over the course of their career.

They know the drill.

They know that journalists are going to have trouble remembering which one of them said what, so they make sure that whoever is interviewing them knows which one of them is speaking. They preface every answer with “Keith here,” or “this is Kenny speaking.” Which is very handy, as we found out when we spoke to them in anticipation of their new, cleverly-titled special “The Lucas Bros: On Drugs,” which launches on Netflix on the clever date of 4/20.

The Lucas Brothers grew up in New Jersey and dropped out of law school in order to pursue their comedy careers. They performed on “Late Night With Jimmy Fallon” in 2012 and have appeared on Fallon’s “Tonight Show” a few times since then. They were named one of Variety’s 10 Comics to Watch of 2014, featured in Rolling Stone Magazine’s “Hot List,” and appeared on the cult hit TV shows “Arrested Development” and “Lady Dynamite.” As if that wasn’t enough, they also had prominent roles in “22 Jump Street,” one of 2014’s most successful movies. It’s safe to say their stock is rising.

“It’s pure teamwork now. When we started out, we would occasionally bump heads and get in each other’s way, but we figured out a process. And now we really try to push each other and keep the atmosphere as free flowing as possible.” Keith told us, after we asked the Bros  — who are currently working on a new animated comedy series for TBS — about whether writing with a sibling was more difficult than writing alone. It was the day after National Sibling Day, so we asked them how they celebrated. “We smoked copious amounts of marijuana and watched a lot of wrestling. The same thing we’ve been doing for 30 years,” Kenny said. “Well, not 30 years. That would be weird.”

The topic of their new special was inspired by America’s history with drug prohibition, more specifically it was inspired by the war on drugs, and the people whose lives it ruined, like Keith and Kenny’s father. And their uncle. And some of their friends. This personal connection to a very narrowed topic — combined with the fact that the material is being delivered by twins — makes the special stand out in the sea of comedy specials that has swept over Netflix in recent months. It’s basically a really funny Ted Talk.

REALTED: The best record you’ve never heard was made by a filmmaker you have most certainly seen

They’re very open about their experiences with illicit substances. At one point early on in the special, they talk about what it’s like to trip on psychedelic mushrooms with someone whose appearance is identical to your own. Which made us wonder if they had any other noteworthy drug stories. The story they regaled us with is too long to recount, but it starts with “We were doing a 4/20 show in Denver,” and ends with a naked Kenny walking around a hotel asking everyone he saw if they knew a place he could get a hamburger, before being reminded by a bellhop that he was in a hotel, and could simply order room service.

The subject matter might be serious, but the Bros use their comedic stylings to highlight its farcical elements. We asked if the somewhat hostile political climate had anything to do with their choice of topic. “I think people give Trump way too much credit. Some of the policies that motivated us have been around long before Trump. And as a country, we’ve been edging towards this point since 9/11,” Kenny told us. “Trump wasn’t an inspiration, but he’s a right wing politician, and we were certainly motivated by right wing ideology. Trump was just the cherry on top.” 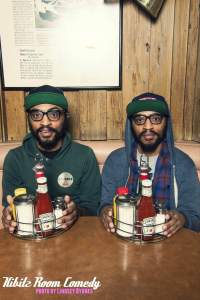 Before we wrapped up, we decided to ask the Bros about professional wrestling. It’s no secret that they’re big fans of the business — their publicity bio mentions that Bret “The Hitman” Hart is their favorite person of all time, and Jake “The Snake” Roberts played himself in their animated series “Lucas Bros. Moving Co.” They get asked about it in pretty much every interview, so we just asked them to give us a brief overview of their fandom. “It’s inspired us on so many levels. From performance, to fashion. There aren’t a lot of things that we embraced as children that have carried over to adulthood,” Keith said. “I think one of the reasons people tend to look down on wrestling fans is because they’re bitter. They’re jealous that they no longer have a connection to something they enjoyed so much growing up,” added Kenny. “But that will all change when The Rock becomes president.”

As for the future, the Bros were very optimistic: “Our goal is to join President Donald Trump in the WWE Hall of Fame.”

“The Lucas Bros: On Drugs” rolls onto Netflix on April 20.