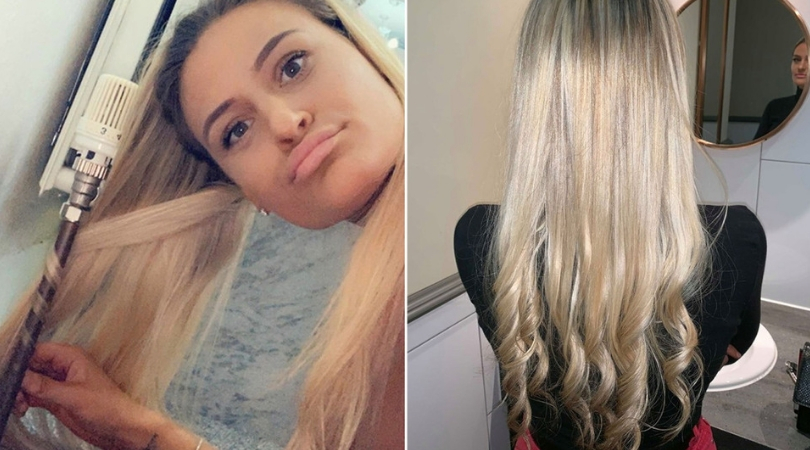 Question! What do you do when you when you’re home alone, only have 10 minutes to style your hair, and can’t find your curling iron or flat iron anywhere? Well, you think fast and go on YouTube to look up cute up-do hairstyles. I mean, that’s what I do anyway.

But no, this woman thought it was a genius idea to basically give up on looking for her curling iron, and use a boiling hot radiator pipe to give her those perfect curls. Yes, she just squatted down on the floor and partially wrapped her long blonde hair around the pipe for that smooth commercial-ready bouncy curl look. Honestly, I really don’t know what to think about this.

Let me give you a little background into this whole mess. Apparently, 22-year-old Emily Kendall was prepping for a night out on the town, but almost called her plans because of a “hair emergency.” Don’t lie, ladies, we have all been there. As the mom of one searched for her hair tools, her daughter attempted to touch the pipes. Trying to stop her daughter from touching them, she had an idea, realizing that the pipe was pretty much burning.

You do What You Gotta Do!

So, she got down on the floor and then wrapped her hair around the copper pipe, careful enough not to burn herself. You know, the normal. 20 minutes later, she said her hair was fully curled. Kendall said she was “delighted” that her curls lasted all night, and has vowed to continue her trendy “hack” until she can get another curling iron. She also noted that this “new technique” was way faster, since with her curling iron it takes 40 minutes, and she is “saving on electricity in the meantime.?

Which, I mean sure you’re saving time on curling your hair, but do you know the damage you’re doing to it? You’re basically using a freaking heater on your hair! That can’t be good. Even hairdressers hate using any sort of curling iron or hot styling tools on someone, imagine a heater! Yikes. PLUS, what if your hair would have gotten on fire?

Now, I don’t know what y’all think about this, but this “good hack” to me seems nuts. Listen, Kendall, I am going to go ahead and give you an A for effort, but an F for creativity because there are way better methods out there. Don’t complain when your hair burns off your skull.