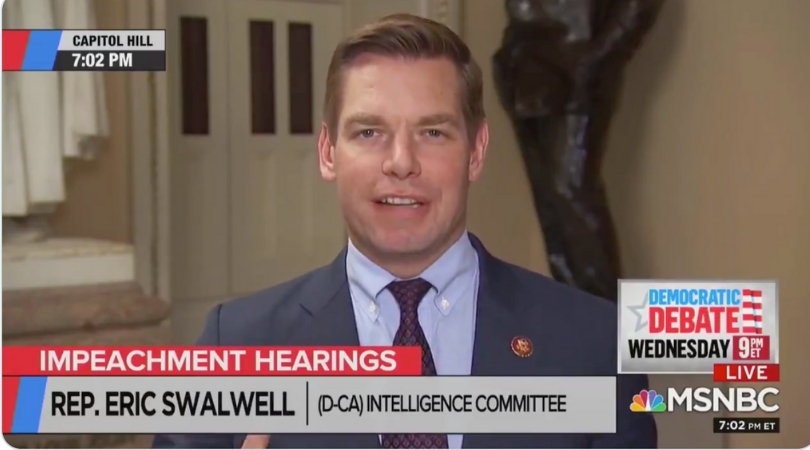 OH MY GOSH. THAT IS A FART. THAT IS A FART, LADIES AND GENTLEMEN. I really have to commend Democrat Rep. Eric Swalwell for hilariously trying to cover up his obvious flatulence by just nonchalantly continuing his thought. I mean, WHAT!? This man couldn’t just hold it in one second more, he just had to rip an enormous one and quick.

In case you don’t’ know who Rep. Eric Swalwell is, he was the first presidential candidate to drop out of the race, possibly sparing the White House of bodily gas. But, that’s not important here. Let’s leave politics aside, because well, it’s been quite a time for that. What matters here is that this man farted on live television and had no regret whatsoever. He was being interviewed on MSNBC’s “Hardball With Chris Matthews” about Donald Trump’s impeachment hearings. I’m sure Chris Matthews himself was having a hey day.

Turn the sound on, this is real pic.twitter.com/DyElNSwYog

As expected, the video quickly went viral on social media because it’s gut-wrenching and well, farting is funny. Twitter quickly began to poke at the situation, creating the hashtags #Fartgate and #Repswalwell, trending worldwide. President Donald Trump even had a few words to say about the whole incident, of course. Maybe a ploy to use this situation to literally trump the dire situation of his impeachment hearing.

Congressman Eric Swalwell quickly responded to the incident and denied that it was him, but I mean, you can totally tell it’s him. He leaned back a little bit, and boom, out of his tush it came. He even had a little crack in his voice. It was obvious.

Still, he tried to explain the situation through a tweet saying that the noise was the “hardball mug scraping across the desk” and urged everyone, including the “conspiracy theorists” to forget about the fart and focus on the actual news. Embarrassing, yeah sure. He’ll forever be known as the dude representing California that farted on live TV. The worst part about this is that it was a fart that was heard around the world, but at least no one was there to smell it.

While we may never know if it was an actual fart or the desk itself, it was pretty funny. We surely needed it to cheer us up a little bit. Honestly, he has my respect, truly. Maybe taxpayer dollars can be used for entertainment purposes. Just kidding. But anyone who needs to let out a fart this loud is a true hero because well, it was more than loud. He needed to release that some flatulence out of his body ASAP. I mean, to fart live on national television takes true guts.

Swalwell for the win.

Excuse me ma’am, how did you react to Mr.Salwell farting on worldwide news!? 😝🤣😂🤣 #fartgate pic.twitter.com/m4zNcWSj9F

#fartgate is trending #1 on twitter. What a time to be alive pic.twitter.com/6HrYqVRSTz

Who knew all this time that Swalwell was the whistleblower. #fartgate pic.twitter.com/zzLzWb3JbE

Live look at Eric Swalwell talking to his staff after his on air fart pic.twitter.com/tcHd5P6pWH

This article was originally published on November 19, 2019.