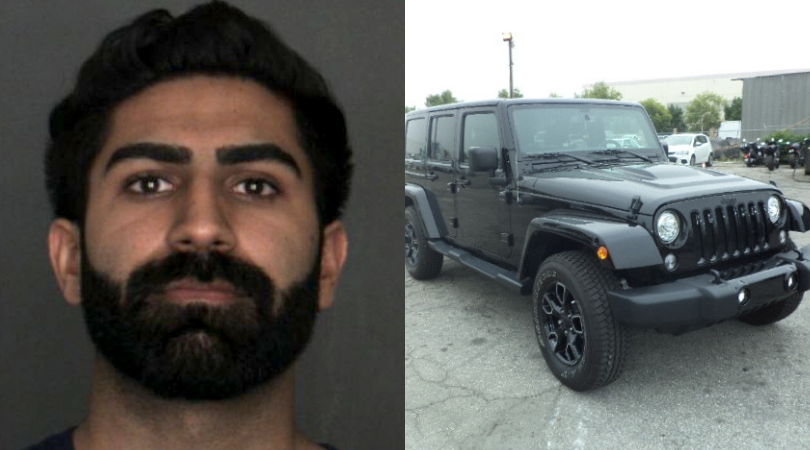 They say that karma will eventually come back for you, and for a 23-year-old Fontana man, it came back twice as hard. Imroj Singh thought it would be a good idea to impersonate a police officer and drive around conducting traffic stops. For the fun of it, because he probably tried out to be a cop and failed, so he decided to take matters into his own hands. At least that’s my theory anyway.

According to authorities, Singh was driving around in his black four-door 2018 Jeep Wrangler, where he installed red and blue flashing lights in the vehicle’s front grill. Making his “nightly rounds” he decided to pull over an unmarked car on the freeway. Who was that person? A real detective from San Bernardino County Sheriff who actually went through training.

A man impersonating an officer attempts to pull over a detective in an unmarked Sheriff’s vehicle https://t.co/kjjdbBGS24 pic.twitter.com/UN0lbZci9C

The Rancho Cucamonga detective initially thought that it might be an unmarked CHP unit and quickly began to pull over. But, being a smart cookie, he realized that Singh wasn’t a real cop and decided to scare him by putting on his real lights and sirens to chase him down.

So, after a short high-speed chase, the 23-year-old eventually yielded after making an exit and was obviously arrested and booked into the West Valley Detention Center with misdemeanor charges for impersonating a peace officer. Authorities believe he may have previously used the lights and Jeep to stop other people, which is kind of scary to think about. Not the pulling over part, rather the “punishment” part. I wonder what he was asking for since he can’t physically give tickets to them?

Because if a cop pulled me over and asked me for money, I would automatically drive off. Because I’m not dumb. But, I do get that some people get scared when it comes to cops, so you never know. Hey people, word of advice, stop doing idiotic crap like this. It’s one of the stupidest ways to go to jail.

Watch: S600 Royale: The One-Off Mercedes That Baffled Everyone