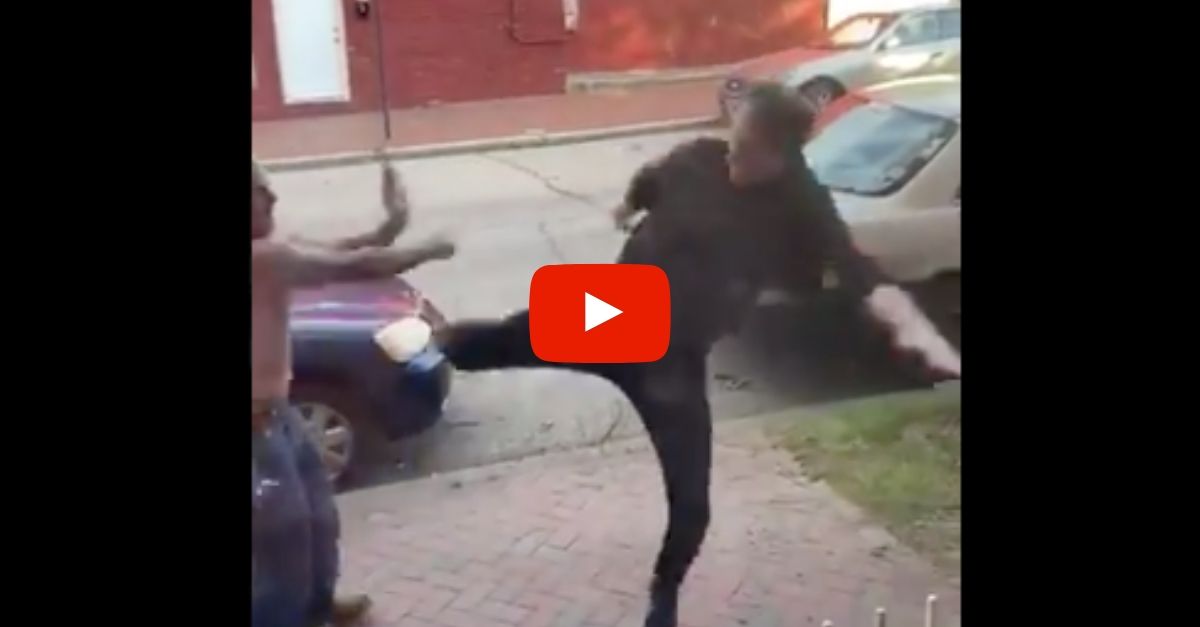 Okay, I’ll admit it, I saw Jeff Goldblum trending on social media and I panicked a little bit. Don’t worry, the actor is completely fine, nothing coronavirus related, but turns out his doppelganger is causing quite the commotion out here. The internet is seriously going nuts over a viral street fight video, where one of the guys has a striking resemblance to the movie star, and well, the footage is completely nuts.

The historic and crazy brawl was captured by Twitter user Leo Senpai who claimed the two people involved are neighbors. The fight features some pretty insane moves by one of the guys, who let me say, must have had some sort of martial arts training or took some Taekwondo classes because his moves are insane.

Omg why did I seem them too!! pic.twitter.com/SjCGMPpwYr

So, let’s meet our contestants. In one corner we have a shirtless man who’s wearing blue jeans and work boots. And in the other corner, there is a much taller and skinnier man in a loose-fitting shirt with jeans,  sneakers, and glasses. Yes, at a quick glance, and without thinking, this is the man that looks like Goldblum, you can’t tell me that I’m wrong.

As for what exactly led to the brutal street fight, the cameraman stated the guy who was shirtless was the one who initiated it and was yelling at the guy with glasses calling him racial slurs. The shirtless man then initiated the first swing. As the street brawl continues, the video shows the men doing what all men do when they are trying to claim their territory, and start to confront each other by circling around trying to find the best angle to hit.

That’s when the shirtless man becomes the aggressor and throws the first punch and everything goes wild. Fake Jeff Goldblum then leashes his anger by using defensive punches and actually throws the other man back before then spinning and kicking the sense out of a shirtless man who then crashes to a nearby parking lot.

The doppelganger followed up with more kicks and punches before sending a roundhouse kick into the shirtless man’s torso, which was pretty much effective and ended the fight. Fake Jeff Goldblum finishes this man in a matter of seconds. Unfortunately, he apparently did break his arm, but besides that, my man is good.

According to Senpai, every time you talk to this shirtless man he always says something controversial and insults people around him. So did he deserve it? Maybe, we still don’t know the background of the whole story. Still, never use violence to solve a problem, kids. We know better, it’s unnecessary. Pretty funny though, I will say that.

Editors Note: This article was originally published on May 14, 2020.