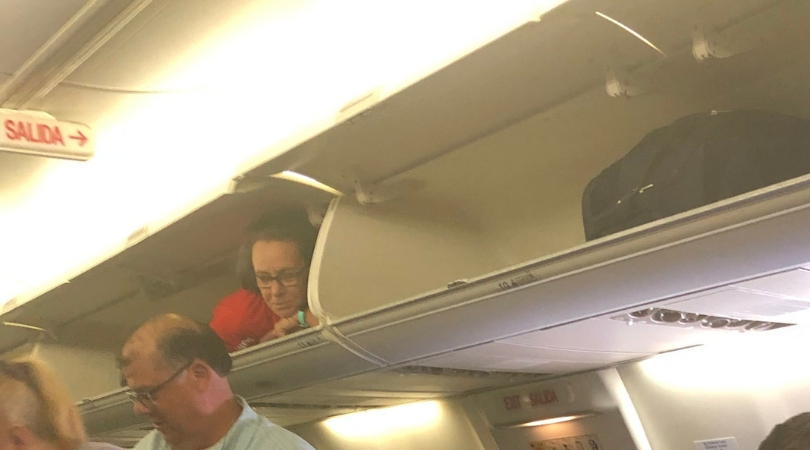 A Southwest Airlines flight attendant literally decided to crawl into the overhead bin of a plane in Nashville, Tennessee to greet passengers in a different yet hilarious way. The attendant had boarding passengers do a double-take as they looked for a spot to put their bags, only to realize there was no room left. Why? Because this woman was just chillin’ inside, minding her own business with heels and all.

Passenger Veronica Lloyd shared the unusual video to Twitter, questioning the attendant’s antics. Her tweet wrote, “Is this a dream? I can’t get over how weird I find this. @SouthwestAir please get it together.” Lloyd followed up with a photo of the smiling flight attendant looking as comfortable as ever, nested inside the overhead bin as if she was a cocoon ready to bloom into a beautiful butterfly. According to Lloyd, the woman stayed in the luggage storage area for a good 10 minutes.

Southwest tweeted back to Lloyd asking for more information about the incident, but many social media users feared that the attendant would get in trouble. Several begged the airline to see the funny side of the situation. After “investigation” from the airline, Southwest stated the flight attendant was simply trying to make the flight more fun for flyers since some are afraid to fly or suffer from anxiety attacks.

The airline stated, “Southwest Employees are known for demonstrating their sense of humor and unique personalities. In this instance, one of our Flight Attendants attempted to have a brief moment of fun with customers during boarding. Of course, this is not our normal procedure, and Southwest Crews always maintain Safety as their top priority.”

My question here is, how in the world did this woman get up there in a skirt and heels? Did someone give her a little boost or something? I can barely get up the stairs in heels, let alone on top of a baggage compartment!  She deserves a prize or something because it is absolutely hilarious. Odd? Sure yeah, heck I have never been in an airplane that does this. But I can totally see her side of the story, she just wanted to lighten up the mood a bit to show them how much room there was in the overhead compartment and make passengers laugh here and there. To which, she did.

Give her a raise Southwest!