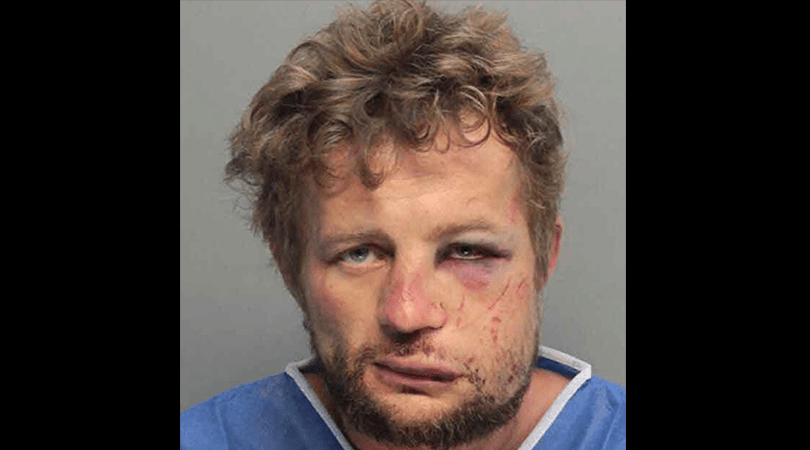 Breaking news: a Florida man is apparently terrible at picking homes to rob if his mugshot is any indication. Why? Because he picked the home of Barry Sands to rob.

Sands was asleep in his home in the middle of the night when he heard what he thought was a frightened woman banging on his door. When Sands went to inspect he opened the door was attacked by 35-year-old Mark Katsnelson. Katsnelson forced his way into Sands’ home, hitting Sands and injuring on his lip and his toe, but then things took a pretty justified turn for Katsnelson. Sands got his wits about him after the initial surprise and beat Katsnelson senseless.

Look at that mugshot again. The reports say Sands just punched Katsnelson in the face a few times so it’s apparently worth asking: does Barry Sands have wrenches for hands? Did he lose both hands in some sort of terrible garbage disposal accident and instead of having hooks attached he told the doctors to toss some wrenches on there instead? It’s worth asking because Katsnelson’s face has been obliterated. I literally Googled “Barry Sands MMA” just to be sure he isn’t a mixed martial arts fighter I’ve never heard of. (He is not, but maybe he should be.)

So, yeah, this Barry Sands guy is simply a man who very much does not appreciate strangers breaking into his house in the middle of the night and attacking him. (Go figure.) So much so that he develops superhuman strength and a pathological hatred of his attacker’s face. We really can’t blame him, can we?

Katsnelson, unsurprisingly, was charged with burglary with assault or battery and then transported to the hospital to have his face put back together. Katsnelson is being held without bond.